This tour is a great way to step back in time by exploring the historic Edisen Fishery and the oldest lighthouse on Isle Royale. Located across the harbor from Daisy Farm, Edisen Fishery is named after Pete and Laura Edisen, a commercial fishing couple and their buildings of operation that represent the one-time booming industry on Lake Superior. Here you'll find old outboard motors, fishing nets, and other protected artifacts.

From the fishery, the tour continues a quarter-mile on the Indian Head Point loop to the Rock Harbor Lighthouse. This restored structure was originally built in 1855 to help ships safely navigate the waters surrounding Isle Royale, specifically to access the copper mining ports. Largely due to the dying mining industry, the lighthouse was only operated for 24 years and went through various stages of disrepair and subsequent restoration. Upon the establishment of the National Park in 1940, the building was reconstructed to be more stable and is now used as a museum to illustrate the island's maritime heritage.

Though not part of the official tour, many visitors continue on a short hike to the Bangsund Cabin and the Isle Royale Wolf-Moose Study. Here they collect data, bones, and antlers that are all involved in their fifty-plus-year study on wolf and moose populations on the island.

Family Friendly: This tour covers a quarter-mile loop between the oldest lighthouse in Isle Royale National Park with demonstrations and artifacts to explore at the Edison Fishery. 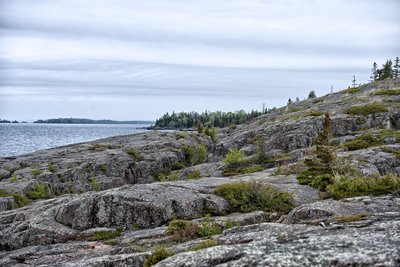