Pu`u Loa, which translates to "Hill-(of)-long-(life)", is a place held sacred to Hawaiians, particularly those of Kalapana.

Located in the ahupua`a (an ancient Hawaiian land division) of Panau Nui on the southern flank of Kilauea volcano, Pu`u Loa is the name of the site which contains a vast area covered with incredible numbers of pecked images in the harden lava, images known as petroglyphs. The archaeological site of Pu`u Loa contains over 23,000 petroglyph images; motifs containing cupules or holes (84% of the total) , motifs of circles, other geometric as well as cryptic designs, human representations known as anthropomorphs, canoe sails, and even feathered cape motifs.

In geologic terms, the center of Pu`u Loa consists of a volcanic pressure dome with outlying areas of ancient, relatively level fields of pahoehoe lava bedrock (pahoehoe, being one of the two types of lava found in Hawai`i, a rather smooth surfaced substrate), dated geologically between AD 1200-1450. 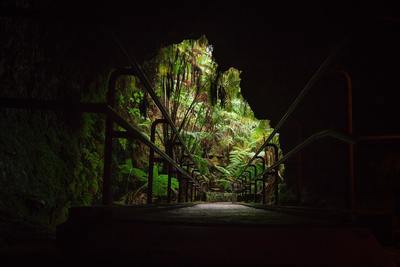