“An awesome route highlighting the best of what Bennett's Farm has to offer. ”

Mountain Laurel (the CT state flower), swamp, and granite litter this route which features awesome sites, sounds, and places to play. Try this route in Spring when everything is in bloom.

Keep an eye out for poison ivy and ticks.

From the parking area off of North Shore Drive, head due east, past the gate, on Red Trail, which starts as a doubletrack. Shortly thereafter, turn left onto Windwing Connector, a short, steep singletrack.

From here, turn right onto Orange Access Trail - West and continue north past Green Trail - Red Maple Swamp, Yellow Trail - Pine Mountain, and Blue Spur in somewhat rapid succession. The trails will be on your left, right, and left again as you stride along this wide, easy lane. Eventually, you'll come to an intersection with White Trail - Campground, turn right onto this trail.

White Trail - Campground leads you into a denser part of the forest, dropping off the ridge, and past a blue-blazed turnoff on the right, bending left and paralleling Miry Brook. After crossing Miry Brook, which is more of a swamp than a brook, White passes Orange Access Trail - North then Purple Trail - Bear Mountain. It then crosses a short bridge and, upon ascending a small dam, meets a blue-blazed unmaintained Spur (forking left). Stay right, still with White, as the moss-sided trail scoots between some imposing slabs of granite. White ends at a junction with Yellow Trail - Pine Mountain - stay left here.

Upon entering Yellow Trail - Pine Mountain, you'll begin ascending the Pine Mountain portion of the State Park. When Yellow hits Pine Mountain Road, work your way around the steel gate and head left on the pavement. Keep an eye out for the yellow blazes as the trail resumes its route, on the right. Now heading uphill, this portion of trail is perhaps the most strenuous part of the route, yet it is also one of the more aesthetically pleasing.

Remain on Yellow for the next mile or so, ignoring the many spurs and side trails that crop up as the trail first gains the rocky slope, then contours along the grassy ridge. The pinnacle of your effort, shortly after the Ives Trail merges with Yellow from the right, is a granite plateau surrounded by pines, oaks, and a few dogwoods.

From that lovely vantage point, which boasts great views of the southern hills, this undulating trail gives you the option of heading around Pine Mountain on the short Pine Mountain Loop before eventually cresting at the ruin of what some believe was Charles Ivess cabin. All that now remains is the stone chimney. Meandering further along the ridge, the trail eventually meets a kiosk, where the Ives Trail heads east, breaking off from Yellow.

From this kiosk, turn right onto a Red blazed trail, Red Connector and drop down this precipitously steep trail. At the bottom you'll take a right and quickly use White Trail - Bennett's Pond which will bring you to a left onto Purple Trail. Follow the purple blazes straight up the hill to an intersection with Bennett's Pond Spur - North. From this intersection, stay right, bypassing this connector and Purple runs atop a flat ridge to its terminus at Red Trail.

Follow the Red blazes as the trail bends right, contours over large granite outcrops, and then heads west. From here the trail undulates through more rocks, occasionally showing awesome views of hills to the south as it trends generally uphill. Finally, after some tight switchbacks, Red Trail heads south and plummets towards the creek connecting Rainbow Lake to Lake Windwing.

Once the trail turns to the right (west), it becomes doubletrack and winds lazily to the shores of Lake Windwing. Continue past Orange Access Trail - West and the Windwing Connector until you reach the parking area on North Shore Drive.

The decrepit chimney is the final ruins of a cabin believed to have been owned by composer Charles Ives. Born in 1874, Ives was one of the first American composers of world-renown and born in nearby Danbury, CT. 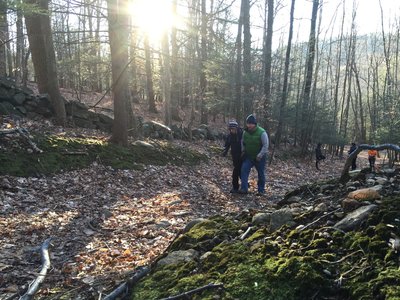 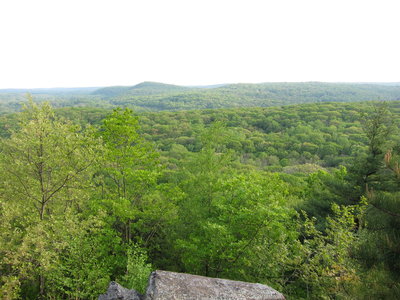 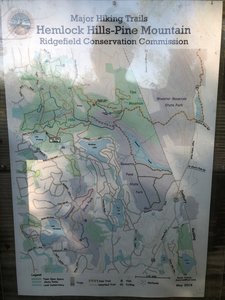 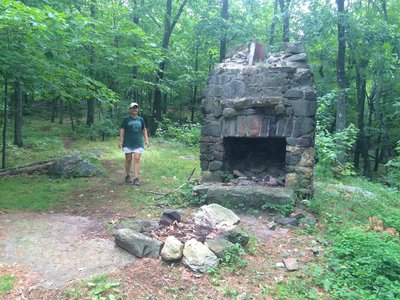 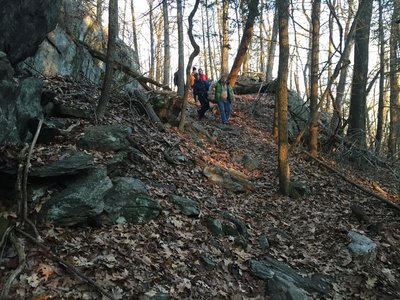