“A straightforward, rolling mesa trail culminating at a historic viewpoint. ”

From Deertrap Mountain Trail, the trail rises slightly, then begins a slow descent to the edge of the canyon as it heads northwest. Almost a mirror image of the ascent you took to get to this point, the descent to the canyon's edge is a mellow hike ending in a populous pinyon-juniper forest.

The end of this trail plays host to quite a few wonders:

The Cable Mountain Draw Works is an early 20th century aerial tramway that was used to move lumber and timber from the mesas of Cable Mountain to the floor of Zion Canyon. The structure was listed in the National Register of Historic Places in 1978.

The Draw Works was originally conceived and constructed by Springdale pioneer David Flanigan, who regarded the Draw Works as a fulfillment of an 1863 prophecy by Brigham Young that lumber would one day be transported from the canyon rim as the hawk flies. During operation of the Draw Works, from 1901 to 1927, the structure was used to move hundreds of thousands of board feet of lumber, goods, people occasionally, and a dog once, to the canyon floor 2,000 feet below. 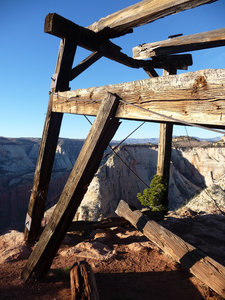 Northgate Peaks Out and Back