“A challenging hike up two of the Collegiate 14ers. ”

The Cottonwood Creek Trailhead is generally closed for winter several miles below the start of the Horn Fork Basin Trail.

Though the land manager requests all dogs be leashed, you'll likely see n number of dogs with a ratio of leashed dogs to unleashed 0:n.

While Harvard and Columbia aren't that difficult in and of themselves, connecting them via a steep, loose, and rocky traverse makes for an incredibly long day. This Sawatch twofer is an exhausting day for even the fittest of hikers.

This is a rugged and at times dangerous route. Hiking it the opposite direction MAY yield a slightly easier time but either way, this route is long, high altitude and includes at least some amount of rock scrambling.

This hike is one hell of a slog. Bring plenty of food, water, and warm clothing. Despite many miles of excellent trail, it's worth considering wearing hiking boots instead of trail runners - the traverse between Columbia and Harvard is extremely loose and rocky, and you'll likely find your ankles covered in scree more than once. Expect an 8 hr day if you're a very fast hiker, and 10-15 if you're on the average-slower side.

From the center of Buena Vista, head west on County Road 350. After 2 miles, turn right onto CR 365. In just shy of a mile, turn left onto dirt CR 361. Continue 5 miles to North Cottonwood Creek Trailhead. There is free parking and camping here, but no potable water or latrine. The trail starts to the west.

Continue up an excellent singletrack trail, low in grade and with few obstacles. In 1.5 miles, pass by a left turn toward Kroenke Lake. Stay right. As the trail steepens there will be more roots. After another 1.5 miles the trees will start to get more spaced out and the trail will be less obvious. As the west slopes of Mt. Columbia come into view, head right towards a boulder field, leaving the Horn Fork Basin Trail.

Hike up a small hill out of the forest, continuing up a short gully to the left of the boulder field at about 11,800 ft. Cross the small boulder field, angling uphill and to the right. Avoid a set of cliffs, creating your own switchbacks through the rocks. Continue to the left up steep, grassy slopes toward the shoulder of Mt. Columbia. The trail here is vague, but if you continue up the ridge toward Columbia's visible summit you can't get lost. Angle to the left, reaching a rockier summit ridge at about 13,600 ft. From here, the trail is more obvious and the grade less steep (as seen on the elevation profile). Continue about a half mile along the ridge to reach the summit of Mt. Columbia.

While you've finished the steepest hiking of the day, there's still plenty of misery left. From the summit of Mt. Columbia, head north, dropping to the right of a clear connecting ridge with Mt. Harvard. Despite being called the Frenchman Creek #1457, THERE IS NO TRAIL HERE and the route gets dubious at best. From mile 6.2 to mile 7 the route is sketchy when hiking the the mapped direction. Following the route the opposite way MIGHT be easier but either way you're in for a ruggged hike. Descend some grassy slopes for about 400 feet over a small ridge, before dropping down some talus into a basin on the side of the ridge. The talus here is steep and loose (see photo). Drop to about 13,000 ft, hopping between some large boulders before coming to another grassy slope. Turn left and head up to regain the connecting ridge with Mt. Harvard. The trail here isn't clear, but the summit is, so just hike toward it. Once at 13,800 ft, the ridge narrows and the trail becomes clearer. Scramble along some class 2+ rock formations (class 3 if you get bored) to attain the summit. Take note, Mt. Harvard boasts an elevation of 14,420 ft, so it's a long way up.

Once finally on the summit of Mt. Harvard, the misery is over. You still have a 7 mile hike back to the car, but it's a pleasant one. Scramble down about 40 ft of solid rock to gain the Mt. Harvard trail. Hike along the western ridge before dropping to the south. There tend to be a lot of mountain goats on this part of the mountain. Hike on excellent trail down some switchbacks, passing the odd cliff or rock band. There is a short talus field at around 13,000 ft, but the trail through it is excellent. About 1.5 miles from the summit, you'll be deposited into Horn Fork Basin, and the grade flattens out as you hike along the creek and willows. Continue to follow the trail back to the Horn Fork Basin on which you approached Mt. Columbia. During the spring and early summer, this basin is often full of snow and the trail can be hard to find. If necessary, simply retrace your steps from the visible boulder field of Mt. Columbia. Regain the trail and descend back to your car.

While some hikers may elect to make this journey in the opposite direction, this may be both more physically demanding and navigationally difficult. Done in reverse, ascending ends almost 2 miles later, leaving you with a steep descent off Columbia. Furthermore, the trail to Mt. Harvard is harder to find than the one to Mt. Columbia, and it's easier to find your way back down if you've already seen it from the Columbia summit. This hike is hard enough in the direction described. Don't change it unless you really want to summit Mt. Harvard first.

From trees and wildflowers to marmots and pika, this route has it all. For some reason, the mountain goats up high are particularly sodium-deprived, to the point where they will follow you around just waiting for you to relieve yourself. The USFS has actually gone so far as to suggest hikers urinate on solid rock instead of dirt trail, thus discouraging these odd creatures from literally eating dirt.

Mt. Harvard is the third highest peak in the state. Sometime during the 1960s a trio of Harvard men, in a sophomoric Ivy League attempt to bolster the status of their alma mater's mountain, erected a flagpole with a high point of 14,434 ft - making the top of Mt. Harvard the highest in the state. Though they escaped electrocution, their efforts were nullified in the 1980s, when the pole was taken down by hikers trying to clean up the 14ers. Unfortunately, Harvard alums may still be found hiking them. 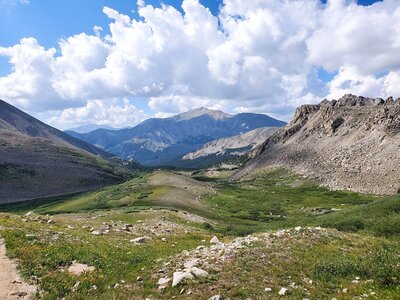 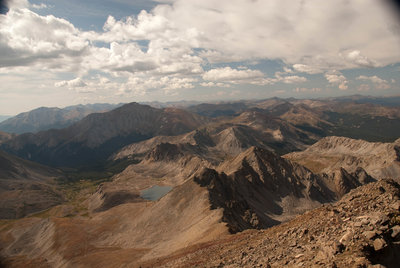 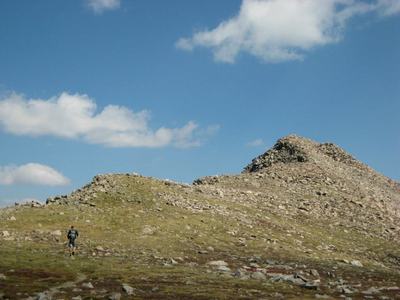 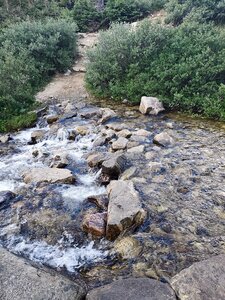 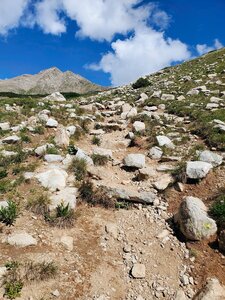 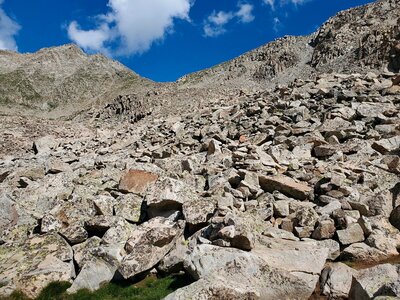