“A strenuous out-and-back punctuated by a trip back in time. ”

Overlooking a valley of the Lamar River, Specimen Ridge offers outstanding views and an unparalleled opportunity to observe Yellowstones geology up close.

Note - Do not confuse this route with the Specimen Ridge Trail.

Be prepared for sudden changes in weather; wear layers (avoid cotton), carry raingear, hat, and gloves. If you see lightning in the area, leave the ridge immediately. Avoid exposed places and isolated trees.

Collecting natural or cultural objectslike rocks, feathers, flowers, antlers, arrowheads, pipestems, and other artifactsis illegal. Please leave everything where you find it.

This trail is not a part of the longer Specimen Ridge Trail. It is a separate, unmaintained trail, along an unmarked route. From the pullout, look southwest, away from the road. Toward the top of the ridge, at approximately the two oclock position, you'll see a cliff outcrop that contains the petrified trees.

Keep this in mind as your ultimate destination. To begin your hike, follow the abandoned service road from the pullout for about 100 yards (91 m). Veer right onto the intersecting trail and start climbing toward the ridge. Stay on the most the most obvious trail to the top of the open ridge.

Follow the ridge line to the southwest in the direction of the cliff outcrop you saw from below. A wildlife trail cuts across, below the top of the ridge, and traverses a forested area before ending at the trees. Take in the magnificent view across the valley. To the north, you can see the Slough Creek Valley and Absaroka Range. Descend the way you came up.

Petrified wood is a fossil of woody vegetation. Most fossils are imprints of plants or animals.

Petrified wood is a threedimensional fossils that is created when trees, or tree parts, are covered by silica-rich sediment. Water leeching through the sediment dissolves the minerals in the soil and penetrates the cells of the tree. As it flows through the plant tissue, it leaves the minerals behind to replace the vegetable matter with stone.

Nearly 150 species of fossil plants from Yellowstone have been found, spanning 500 million years, from the Cambrian to the Holocene. Most petrified wood and other plant fossils come from Eocene deposits about 50 million years old, which occur in many northern parts of the park.

Best known are the fossil forests of Specimen Ridge, where the remains of hundreds of these 50-million-year old trees stand exposed on a steep hillside, with trunks up to eight feet in diameter and some more than 20 feet tall. The specimens include sequoia, fir, and numerous deciduous species.

Bears: Although your chance of an encounter is low, your safety is not guaranteed. Minimize your risks by making loud noises, shouting, or singing. Hike in groups and use caution where vision is obstructed. Do not hike after dark. Avoid carcasses; bears often defend this source of food.

The first fossil plants from Yellowstone were collected by the early Hayden Survey parties. An 1878 report referred to fossil forests on Amethyst Mountain opposite the mouth of Soda Butte Creek.

Around 1900, F. H. Knowlton proposed the theory that the petrified trees on Specimen Ridge were forests petrified in place. His theory remained dominant through most of the 20th century. 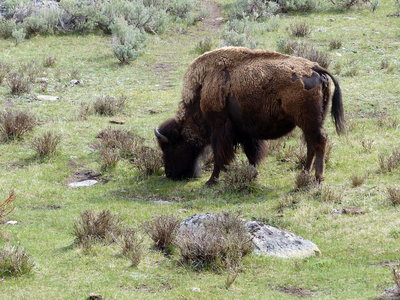 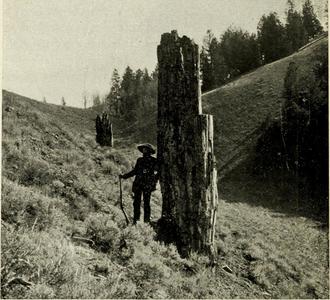