“A long north and south loop around, up and over Lookout Mountain. ”

The biggest drawback is the noise from the interstate, but once moving, it will fade away as you enjoy the trail.

From the first junction from the trailhead under the interstate head across the prairie through grass and gypsum beds along the interstate. Cross under the barbed wire fence and follow the trail as it starts heading uphill.

The trail winds and switchbacks crossing through some oak trees and up and down small ravines. There are expansive views of the northern Great Plains. You then enter the pine forest and weave along the hillside with great views of Spearfish and the surrounding Black Hills. Once in the trees the sounds of the interstate dissipate.

Curve around the trail through one last stand of pine before coming to the junction with the Ridge Trail. Follow the Ridge Trail to the junction with Round The Crown. Go to the right up a short section of unnamed trail that leads towards the summit instead of going around. Continue climbing until the trail appears to stop at a short vertical rock step just below the summit. Find the easiest way up and regain the trail to the summit.

The trail off of the summit is steep and rocky with some potential for a fall. Descend to a two-track road that is used to move equipment to the towers at the summit. Follow the track down until the trail joins the Hopa Maste on the right-hand side. Follow the Hopa Maste back to the northwest through grass and trees until you encounter the Minnesota Ridge trail. Getting onto this trail is tricky because there is more than one trail that heads that way, but you'll know you are on the right trail when you head down consistently.

The Minnesota Ridge goes through treed sections with lots of curves and steeper downhills. Cross a section of gypsum rock outcropping (white rock), before finally making it to the prairie along the interstate. Follow along towards the north and west, crest a small ridge and down to the tunnel under the interstate.

Once used as a lookout for Native Americans, the property was gifted to the City of Spearfish for preservation and recreation. There is now an official trail system and a Committee that oversees the mountain. 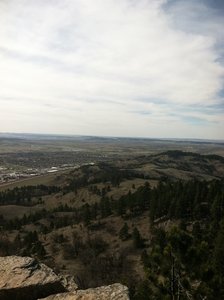 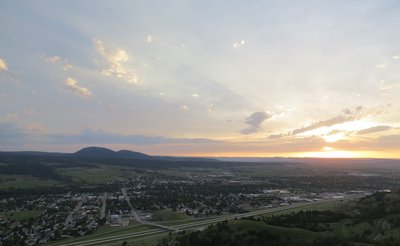 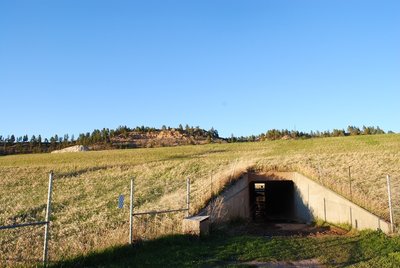