“Outstanding views from the canyon rim await on this fun, fast trail. ”

While the trail can be done in either direction, the shifting views, and visibility, seem to flow a little better going south to north. This also allows from a slightly more gradual ascent to the top.

Watch out for small cacti, which like to grow on the slickrock along the canyon rim.

Running along the eastern rim of Castlewood Canyon, Rimrock Trail offers glimpses into all of the state park's varied ecosystems: plains, valleys, rocky crags, and the canyon itself.

From the southern end, the trail meets at a signed three-way intersection with Creek Bottom Trail and Inner Canyon Trail in a scenic meadow. Follow the dirt singletrack as it wraps around to the north, climbing to the small remaining portion of the dam along the hillside. Stay right, following the trail as it switches back up the canyon wall. At one point it appears to dead end into a rock wall; turn left here for one last zig zag to the top.

After the brief climb, the trail stays flat as it follows the canyon for a little more than a mile. It's mostly slickrock up here, with the occasional rock cairn to help mark the way (or just follow the contour of the canyon). Fantastic views abound in every direction: green rural farmland to the south, the beginning of the Great Plains to the east, the valleys of the Palmer Divide to the north, and of course, Cherry Creek and Castlewood Canyon to the west. It's a sight few people take the short trek up to see, but if you're in the area, it's not to be missed.

A short spur splits off towards the rim as the trail veers right to begin its descent. The way down is a little more rocky and technical than the path up, but it's not so much difficult as it is fun. The trail levels out briefly for one last vista to the north before resuming its descent. At the bottom, Rimrock Trail enters a completely different feeling environment of green, leafy foilage, noticeably cooler than the rim. 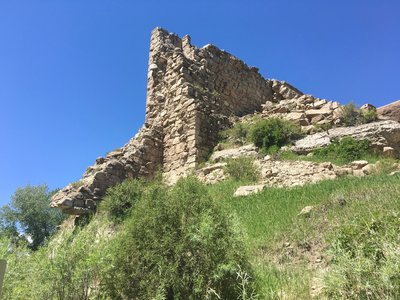 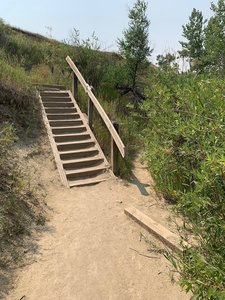 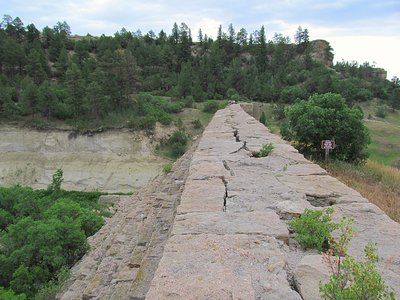 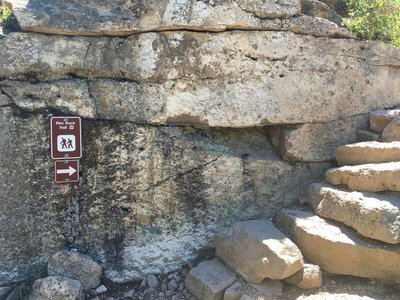