“Pemetic Mt’s “easiest” ascent, which climbs out of a piney forest to a rocky summit with great views ”

Family Friendly The easiest way to get to the top of Pemetic Mountain, the older kids will love the sense of accomplishment they gain from reaching the summit.

Although this is the most “gradual” climb of Pemetic Mountain’s series of trails, it still ascends quite a bit - over 700 feet in a matter of 1.1 miles. Of all of this peak’s paths, this one is definitely the most friendly and accessible.

The best way to approach this trail is from the Jordan Pond House parking lot. For those who don’t have a car, the free Island Explorer bus also drops off close to that spot.

This path technically begins at approximately the midpoint of the Bubble and Jordan Ponds Trail. So, you’ll have to have traveled in approximately 0.6 miles on that path from the Jordan Pond House area before you reach the Pemetic South Ridge Trailhead.

The hike starts in the piney forests on the lower part of Pemetic and eventually pops out onto the southern rocky ridge of the mountain. The climb is fairly gradual over roughly the first 0.25 miles, then you’ll come to a steep area for approximately the next 0.2 miles until the trail eventually becomes more gradual once again. At 0.6 miles up the path, the Pemetic East Cliff Trail will link-up with the path coming in from the southeast. From there it’s another 0.5 miles northward to the summit, where you’ll have a fantastic 360-degree view of several of the park’s key bodies of water (including Jordan Pond, Eagle Lake and Bubble Pond), as well as some terrific looks at several of the park’s other key mountains (including Cadillac, Penobscot, The Bubbles, and Sargent).

Overall, this trail is probably the “easiest” way to ascend Pemetic. It is the least challenging of the mountain’s trail system, but it’s still got a lot of elevation gain. If one of your goals is to summit Pemetic, but you’d like to do it with the least amount of strain, this heavily forested trail is the way to go. 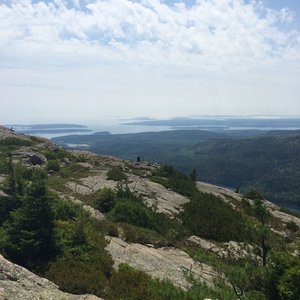