“A remote trail on the old Inside North Fork Road parallels a beautiful river through varied forest. ”

Bring bear spray. Remember that border is closed to international travel without prior permission.

The Inside North Fork Road heads north from the Polebridge Entrance Station and follows the North Fork River past the Bowman Lake Road. Just after crossing Kintla Creek, a blocked road takes off to the left, while the road itself continues to the right. Park your car at the blocked road and start heading down the road, as this is the Kishenehn Trail.

The trail is actually the old Inside North Fork Road that used to be the primary way to get to Canada in this area before the North Fork Road was built. Along the trail, keep your eyes open for the occasional vintage car part, or the remains of a pulley system that used to transport people over the river to the post office.

From the trailhead the trail wanders through an old burn looking down on the river and some boggy areas. It enters some older stands of trees and wanders away from the river, following the terrain, then comes up alongside the river, just before it fords Starvation Creek.

It continues along the beautiful North Fork Flathead River for a bit, then wanders up through the forest. The forest is a wonderful old, airy forest with stretches that are straight as an arrow. After wandering through the trees for a bit, another creek crossing awaits as you need to keep your eyes open for orange markers on trees that are a bit upstream so that you can find the trail again.

A little more forest and some meadows and marshy areas, and you come to a patrol cabin with more outbuildings than your typical patrol cabin. One of them is a beautiful log stable. The Kishenehn Creek Trail comes in here as well, heading west, upstream.

Continuing past the patrol cabin, you have a wonderful mix of forest and sagebrush and aspen meadows as the trail works its way to the swath cut through the forest marking the boundary of the United States and Canada.

Even though this trail is extremely remote, it does get patrolled. If you encounter rangers on the trail, expect a couple more questions than normal as they are making sure that you're out to hike, not participate in the illegal transporting of goods across the border.

This content was created by Jake Bramante of Hike 734. Visit hike734.com for more expert Glacier content and maps that help you decide which trail to hike.

Mix of burned and unburned forest gives a variety of plants from fireweed and geraniums to arnica and dogwood. Small birds and mammals are common as well as the occasional bear, elk, and very rare wolf. 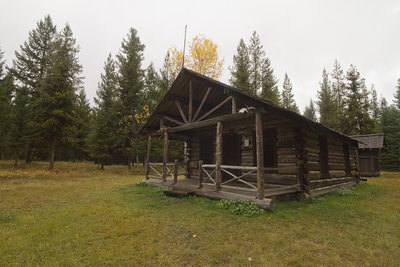 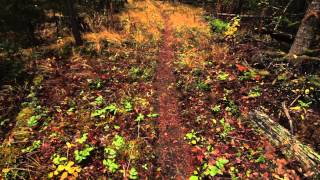