The trail is often snow-covered until early July. This strenuous, high elevation trail is not recommended for persons with heart and/or respiratory problems. Grizzly bears frequent this area in spring & fall.

Be aware of lightning above treeline. To avoid afternoon thunderstorms try to summit before noon. Even on warm summer days, bring rain gear, wool hats, and gloves.

Climbing any mountain in Yellowstone is a tough, but memorable, adventure. The Avalanche Peak hike superbly combines rugged mountain scenery with the delicate beauty of Yellowstone Lake. For the distance it's the finest route in the park!

This out-and-back climbs 2000 feet in just 2.3 miles. It's pretty much uphill all the way!

The trail leaves the highway, enters the forest, and immediately begins its steep climb to the top of Avalanche Peak (10,566'). Not far to your left a small creek carries freshly melted snow down from the high country. About 0.7 miles from the highway the trail makes a short dip, then enters a small sloping meadow, which affords an impressive view of well-named Top Notch Peak to the south.

At the top of the small meadow the trail stays left and reenters the forest. Most of the trees here, living and dead, are distinctive five-needled whitebark pines. The bark of its seedlings is covered with a fine white coating and mature trees often display a whitish cast. Drought conditions in the Northern Rockies made the mature whitebarks susceptible to attack by mountain pine bark beetles. The death of this mature forest is a blow to Yellowstone’s grizzly population, that depend heavily on nutrient-rich whitebark pine nuts for food in the fall. But see how young whitebark trees are beginning to regenerate the forest. Eventually they will be old enough to produce pine nuts. The trail passes through several areas where the trees have been flattened. This was caused by powerful snow avalanches that propelled down the mountain many years ago. This explains how Avalanche Peak got its name.

At the 1.3-mile mark the trail levels out and you are at the foot of a huge amphitheater-like bowl, the top of which is Avalanche Peak. Follow the trail to your left as it climbs through open talus slopes and makes its final ascent of the peak along the mountain's southern ridge. These rocky slopes provide excellent homes for the tiny pika (or "rock rabbit"). As you hike, listen for their forceful "bleats" and watch for piles of grass that they harvest and spread to dry. Once dried, the grass is stored for winter in a den beneath the rocks. Amazingly, a tiny 5-ounce pika may gather as much as 50 pounds of grass for winter.

The rugged Absaroka Mountains (pronounced "AB-sa-RO-ka" or "ab-SAR-o-ka"), which run north and south from Avalanche Peak, were once known as the "Yellowstone Range" and were unsuccessfully dubbed the "Sierra Shoshone," before later being officially named for the Crow Indians who inhabited this region. "Absaroka" (which means "children of the large beaked bird" in the Crow's native tongue) is the Crow Indians' name for themselves. These mountains are volcanic in origin. Between 50 and 55 million years ago a myriad of volcanos erupted, sometimes violently, spewing hot molten lava, breccias, rock bombs, cinders and ash. At the end of the Absaroka volcanism, Yellowstone was buried beneath several thousand feet of volcanic debris. Millions of years of subsequent geologic activity have obscured much. Today, the Absaroka Range is a small remnant of the vast pile of volcanic rocks that once covered the entire Yellowstone region.

From the summit of Avalanche Peak, Yellowstone Lake unfolds magnificently before you. Early trappers and explorers were amazed that a lake of such huge dimensions (135 square miles of surface area) could lie at such a high elevation above sea level (7,733 feet). Today we know that Yellowstone Lake is the largest lake for its elevation above sea level anywhere in North America.

Using your map locate each of the lake's arms. The lake resembles the palm of your right hand. The Southeast Arm of the lake represents the little finger and the South Arm the next. The rather deformed middle finger is made by the Flat Mountain Arm. Delusion Lake was originally believed to be another arm of Yellowstone Lake, forming the index finger of the hand. It was later discovered to be a separate lake (the 5th largest in the park). Because of the earlier mistake, it was named "Delusion" Lake. West Thumb, of course, forms the thumb of the hand.

Once you have enjoyed your stay on top of the world, retrace your steps to the trailhead. But use caution on the way down, small rocks make the steep parts treacherous!

Grizzly bears frequent this area in the fall, seeking out whitebark pine nuts. 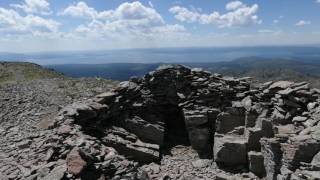 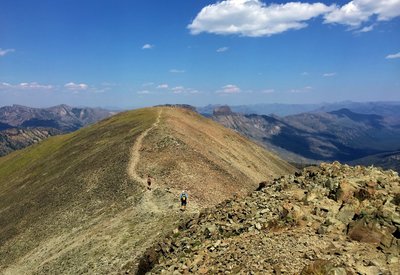 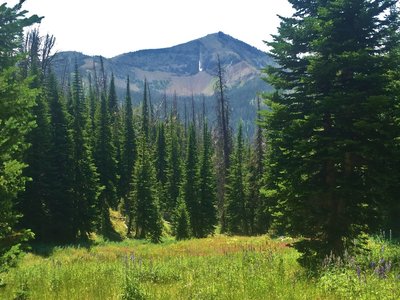 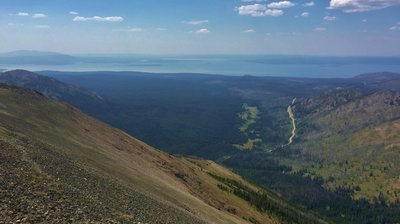 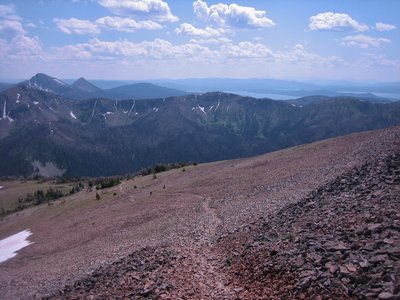 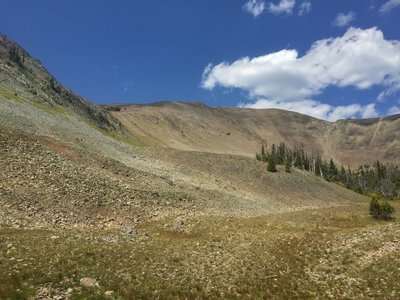