“A winter-only, access trail to enjoy views from Inspiration Point of the Grand Canyon & Lower Falls. ”

Open in winter only. In the summer months this is an auto road. This 1.7-mile, occasionally groomed, ski trail takes cross-country skiers and snowshoers to Inspiration Point for commanding views of the Grand Canyon of the Yellowstone and a portion of Lower Falls.

The trailhead begins on the North Rim Road near the Canyon Village Visitor's Center. It follows the road 0.8 miles then turns left and follows the spur road 0.9 miles to Inspiration Point. At the 1.3 mile mark, the trail passes Glacial Boulder, a 500-ton granite "calling card" left behind 10,000 years ago as the Pinedale Glaciation retreated north.

The existence of this "glacial erratic" so near the river-eroded canyon and so far from any significant granite formation, posed a profound riddle for early geologists. In 1878 a young geologist, named William H. Holmes, found cover from a thunder storm beside this rock. He wrote, "[I] took shelter under the overhanging edge of a great rock in the dense timber. Considerably to my surprise I found it to be a very compact, coarsely crystalline feldspathic granite . . . It is within a stone's throw of the brink of the Canyon and rests upon a sheet or series of rhyolite, not less than one thousand feet in thickness." This set him to thinking. Then, like a bolt of lightning, it came to him that this rock was likely quarried high in the Beartooth Mountains to the northeast and transported more than 30 miles downstream by a massive river of ice. Years later, geologists reasoned that glaciers moved across, rather than through the canyon, and had little to do with its carving.

The trail ends at the 1.7 mile mark as it drops to Inspiration Point parking area. Head out to Inspiration Point to take a look. Until 1975 the walkway led all the way to the point. A significant earthquake that summer caused rock to weaken and eventually a 300-foot vertical column of rock slid out from under the walkway. There were 15 visitors on the scenic overlook when the slide occurred. Fourteen scrambled to safety, while the 15th remained to take pictures. When he was rescued, he had some pretty good shots! 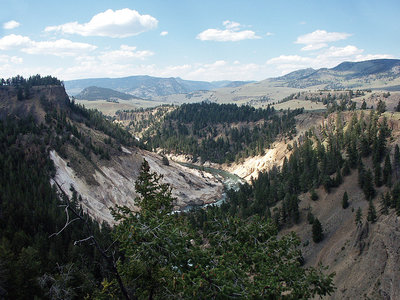 Black Canyon of the Yellowstone