“A short trail to visit two of Yellowstone’s largest and most interesting hydrothermal features! ”

Family Friendly A short, easy boardwalk with lots to see. A great spot to get the kids out of the car and stretch their legs. But keep them close, and on the boardwalks - these hot springs are dangerously HOT.

Geyser basin boardwalks protect you and preserve delicate formations. You must stay on boardwalks. Scalding water underlies much of the thin, breakable crust. Pools may be near or above the boiling temperature and can cause severe, possibly even fatal, burns.

Midway Geyser Basin, once known as “Hell’s Half Acre,” is called Midway because of its location between the Upper and Lower Geyser Basins. It contains two of Yellowstone’s largest hydrothermal features - Grand Prismatic Spring and Excelsior Geyser.

From the parking area, the path crosses the Firehole River. Notice the large volume of thermal runoff water rushing to meet the river. Just up the hill, Excelsior Geyser discharges more than 4,000 gallons of water per minute into the river, making it one of the most prolific hot springs in the world.

As you reach the top of the hill, Excelsior Geyser reveals its gaping 200 by 300 crater. Now dormant for over 125 years, for a brief period in the 1880s, Excelsior was one of the largest geysers in the world. Its explosive eruptions sometimes measured 300 feet high and 300 feet wide! Then Park Superintendent Norris named the new attraction, stating that he found it “so immeasurably excelling any other [geyser], ancient or modern, known to history, that I find but one name fitting, and herein christen it the 'Excelsior.'”

The boardwalk bends to the left around the side of Excelsior then bends back to the right to reach Grand Prismatic Spring. This enormous spring measures over 370 feet across and 120 feet deep, making it the second largest hot spring in the world. Notice its brilliant colors. Early visitors to the park were told it was “so dazzling that the eye cannot endure it.” Most of the colors you see are caused by bacteria which thrive in the hot water. Certain types of bacteria are found in extreme temperatures, including boiling water. The less tolerant photosynthetic cyanobacteria (commonly called blue-green algae) survive in Yellowstone's thermal pools in temperatures up to 167° F. At that temperature, it is normally a light yellow color. The water cools as it moves farther from its source. Soon orange, red and finally green colors are found near the outer edge of the spring.

Look closely, even the steam over Grand Prismatic reflects the brilliant colors of the pool. In 1839, mountain man, Osborne Russell described it this way, “At length we came to a boiling lake about 300 ft. in diameter... The steam which arose from it was of three distinct colors from the west side for one third the diameter it was white, in the middle it was pale red, and the remaining third on the east light sky blue...”

From Grand Prismatic, the trail loops back to the right and continues to the parking area. 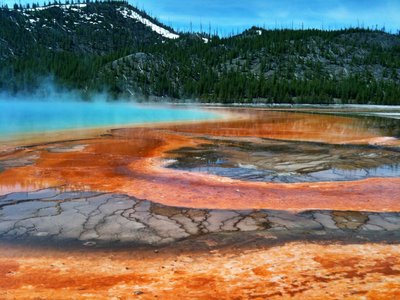 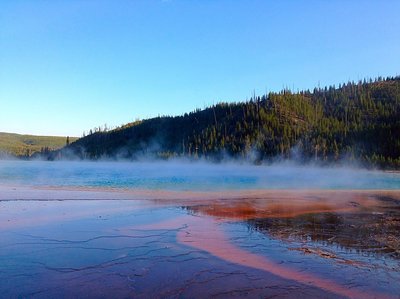 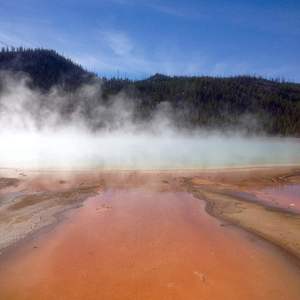 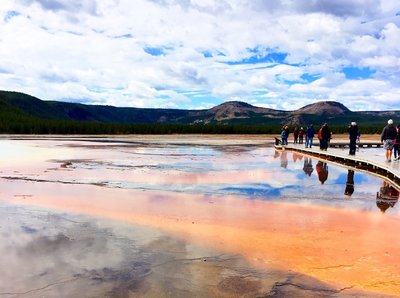 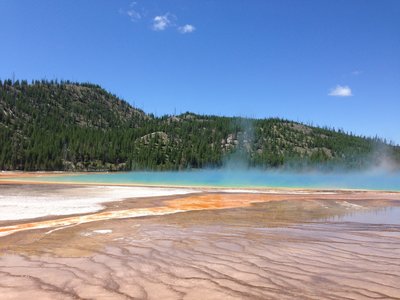 All Clear 71 days ago See History