“Challenging but rewarding - Heart Lake at your feet and the Tetons close enough to touch! ”

The Heart Lake Bear Management Area is closed to hikers April 1 through June 30, making it impossible to reach the Mount Sheridan Trail until July 1.

The Mount Sheridan Trail begins at Heart Lake, some 8 miles from the nearest road. Most hikers camp at the lake the night before climbing Sheridan. You'll need an early start to beat the afternoon thunderstorms. This is especially true if you plan to hike out of the backcountry the same day.

Mount Sheridan (10,308') looms over Heart Lake. Its only 2.8 miles to the top, but it towers 2,800 feet above the lake and provides a challenge to even the hardiest hiker. The trailhead is located 200 yards south of the Rustic Geyser area. As you begin the hike, scan the skyline to locate the fire lookout station which marks the top of the mountain. This impressive mountain was named for General Philip H. Sheridan, a civil war veteran who later commanded U.S. military forces in the West during the Indian wars. General Sheridan was one of the first conservationists to call for significant southern and eastern expansions of Yellowstone and strongly influenced the decision to send military troops to protect the park in the 1880s.

The Mount Sheridan Trail winds its way up a ridge and assaults the mountain from the north. As you near the top, the trail breaks out of the trees and the views truly become spectacular. Heart Lake spreads out at your feet. The Tetons seem close enough to touch. Shoshone and Lewis lakes, as well as much of Yellowstone Lake, unfold before you.

The fire lookout station on top of the mountain is one of four such stations in Yellowstone. Some bizarre things have happened to rangers who occasionally occupy these stations. In 1973, Barry Nateman, stationed here on Mount Sheridan, was struck by lightning. His hair turned white and he was thrown a short distance, but somehow he survived. Not to be outdone, the lookout ranger on Mount Holmes was relaxing in the "outhouse" when a big wind came up and blew him and it down the side of the mountain! Once you have enjoyed your stay, retrace your steps to the trailhead. Enjoy your afternoon, but remember, it's a good climb from Heart Lake to the highway. 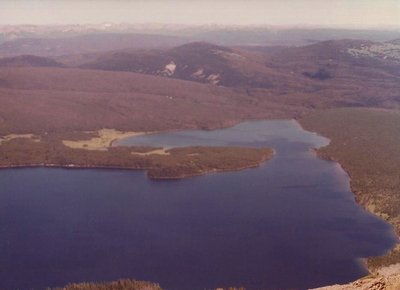 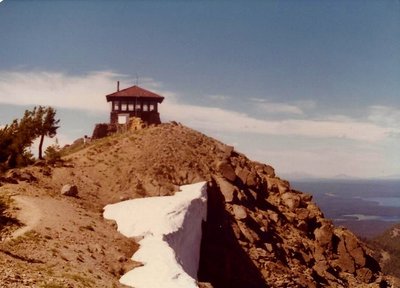