“A short loop leads past some of Yellowstone’s most interesting mudpots, springs, and fumaroles. ”

Family Friendly A short loop with great views of mudpots, springs, and fumaroles.

Geyser basin boardwalks protect you and preserve delicate formations. You must stay on boardwalks. Pools may be near or above the boiling temperature and can cause severe, possibly even fatal, burns. You may also see buffalo on this trail; try to stay at least 25 yards away. Buffalo are always dangerous, but by August, rutting season begins, and the bulls become extra feisty.

The .8-mile loop climbs 100 feet uphill and leads past some of Yellowstone’s most interesting mudpots, springs, and fumaroles (steam vents). The lower loop to Dragon's Mouth and the Mud Volcano is wheelchair accessible. The features in the Mud Volcano Area are among the park’s most acidic. Hydrogen sulfide gas, with its odor of rotten eggs, makes this one of the smelliest places in Yellowstone.

Begin your adventure at the far right end of the parking area. Follow the boardwalk to turbulent, splashing Dragon's Mouth Spring. The rhythmic belching of steam and the flashing tongue of water give the Dragon's Mouth its name. Although there is much activity here, notice that very little water leaves the pool through its runoff outlet.

Next up is the Mud Volcano. When the 1870 Washburn Expedition described Mud Volcano as "greatest marvel we have yet met with." At that time, Mud Volcano had a cone-shaped mud deposit (like a volcano) that covered the feature and give off booming sounds that could be heard a mile away “like the discharge of artillery.” They further reported that it threw mud immense distances and that they found it in the tops of trees 100 feet high and 200 feet away. By 1872 a thermal explosion had blown the mud cone away to reveal what we see today. Although the Mud Volcano can no longer be heard from a mile away nor does it throw mud hundreds of feet in the air, the area is still intriguing.

From Mud Volcano the trail begins to climb up the hill to Sour Lake and Black Dragon's Caldron. Along the way you’ll pass Grizzly Fumarole. The hiss and roar of a fumarole comes from gases - steam, carbon dioxide, and a little hydrogen sulfide - rushing from the earth through the vent.

Sour Lake is just that, a thermally-fed small lake. Just beyond it is Black Dragon's Caldron. It exploded onto the landscape in 1948, blowing trees out by their roots and covering the surrounding forest with mud. The large turbulent stirring at one end of the Caldron gives one the sense that the Black Dragon itself might rear its head at any time.

The trail then loops back down the hill, along the way passing Churning Caldron and Sizzling Spring. The slope below Sizzling Basin, once covered with green grass and trees, became a barren landscape of fallen trees now known as "the cooking hillside." Near the bottom of the hill you’ll see the area known as Mud Geyser, a large muddy pool to the right, that for 30 years in the 1800s erupted to heights of 20 to 50 feet.

Buffalo, or "bison," are commonly seen in the Mud Volcano Area. Bulls often weigh a ton or more and are the largest land mammals in North America. Both the male and female have horns made of compacted hair around a bony core. Horns are permanent features and are not shed annually like antlers. At one time an estimated 60 million buffalo roamed the American West. By 1890 they were nearly exterminated. Today, Yellowstone is the only place in the U.S. where wild buffalo have persisted since the first white man arrived in the new world. 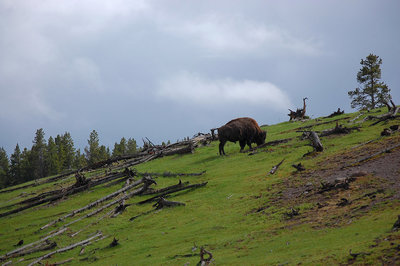 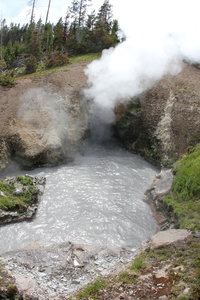 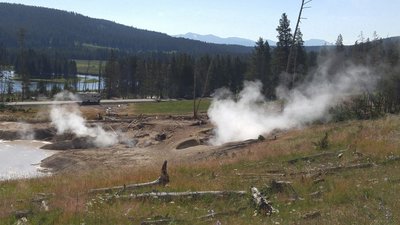 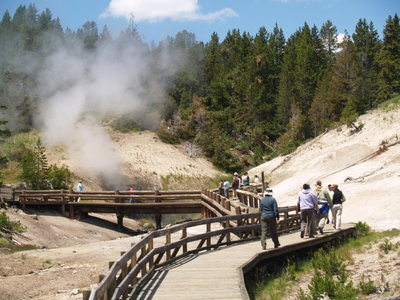 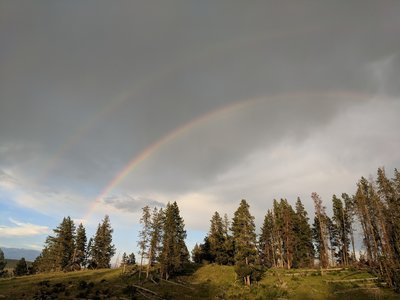 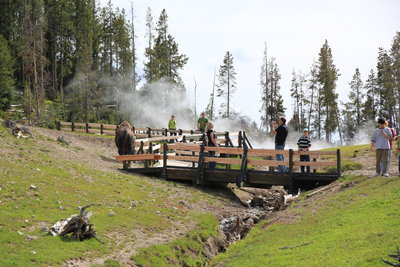