One of the earliest trails in the park to become clear of snow, because of its relatively low elevation and its lack of shade. But you'll have to share the road with an occasional car on this backcountry road.

This all-purpose backcountry road is used by cars, bicyclists, and foot traffic in the summer and by snowshoers and cross-country skiers in the winter. It’s a one-way road from Mammoth to Gardiner for cars; all others can travel in either direction. But whether you hike-it, bike-it, or ski-it, I recommend stating at Mammoth Hot Springs. That way, after gaining 50 feet in the first .2 miles, it’s a gentle 4-mile, 1000-foot downhill trip from there.

The trail begins behind the Mammoth Hot Springs Hotel and ends at the North Entrance Gate to the park, about a 1/2 mile from Gardiner, Montana. To start your trip, look for an unpaved road climbing uphill from left to right. Not many visitors hike the road in the summer because it can be driven in a passenger car. But it’s a terrific downhill ski in the winter and a fun downhill bike ride in the summer (it’s accessible to all bikes, but mountain bikes are recommended). Since most days it is infrequently used by cars, it can even be a decent downhill day trip.

It’s also one of the earliest trails in the park to become clear of snow, because of its relatively low elevation and its lack of shade. So enjoy it early in the season, because it can be a scorcher in August.

After the first 50-foot climb, the road continues gently downhill through open sagebrush meadows good for birding and wildflower viewing in early summer. Ahead on your left lie Sepulcher Mountain (9652 ft) and craggy Electric Peak (10992 ft) beyond. Sepulcher was named for the tombstone-like rock formation near the summit on the north side. Electric was named after an 1872 incident near the summit in which a geological party heard a “crackling noise” and felt electricity “so strong that [they] were obliged to . . . hurry down.” As you descend, enjoy nice views ahead of Gardiner, Montana and Sheep Mountain beyond. To the right is the Gardner River drainage and broad flat-topped Mount Everts.

The road ends near Gardiner, Montana. Both the Gardner River and the town of Gardiner were named for Johnson Gardner, who trapped beaver here in the 1830s. There is an extra "i" in the spelling of the town as the result of a phonetic error by members of the 1870 Washburn Expedition, who used the "Gardiner" spelling in their many articles and publications. Consequently, a number of features became erroneously shown on many maps. In the 1940s the USGS relabeled maps using the correct spelling. Only the town persists in using the "Gardiner" spelling.

There are excellent wildlife viewing opportunities on this trail. Watch for elk, buffalo, and antelope. Closer to the ground look for sage grouse, gray Uinta ground squirrels, and hungry badgers digging for them. 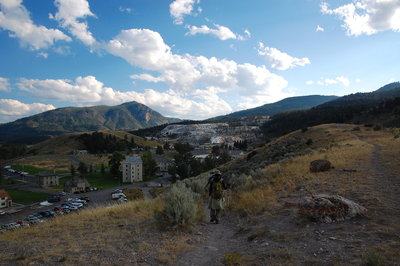 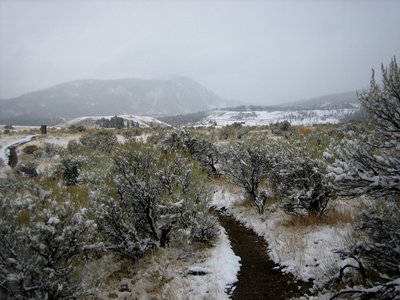 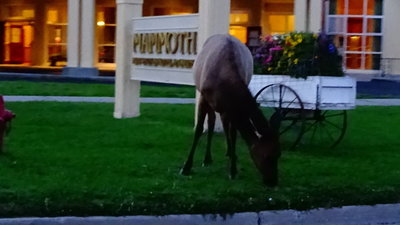