Geyser basin boardwalks and trails protect you and preserve delicate formations. You must stay on boardwalks and designated trails. Scalding water underlies most of the thin, breakable crust. Pools may be near or above the boiling temperature and can cause severe, possibly even fatal, burns.

The trail begins at Castle Geyser, which has the largest cone and may be the oldest geyser in Yellowstone. Since geyserite cones build up at only 1 to 2 inches every 100 years, we know that Castle is quite old. It erupts every 10-12 hours. Eruptions frequently reach 90 feet and last about 20 minutes. The water phase is followed by a noisy steam phase lasting 30-40 minutes. Members of the 1879 Washburn Expedition named Castle Geyser for its resemblance to the ruins of a feudal castle.

The paved path you are following away from Old Faithful was once a part of Yellowstone's Grand Loop Road. In 1972, to reduce stress on the geyser basin, better control traffic, and make this pedestrian/bike path, the NPS constructed the Old Faithful interchange and moved the highway out of the basin.

As you follow the trail, you pass the Orange Springs group of hot springs on the left. Soon you are skirting the Firehole River on the right. Because the Firehole receives large volumes of thermal water runoff, the river never freezes, even at 60 degrees below zero.

A little over 0.5 miles from Castle Geyser, you'll pass a trail junction with Punch Bowl-Black Sand Basin Trail on your left. Continue straight another 0.1 miles to the trail's end near Grotto Geyser.

Early explorers were baffled by the unusual shape of Grotto Geysers silicon dioxide build up. Take a moment to study it - what do you suppose caused the irregularity? The NPS was curious about this also. Some years ago they bore a tiny hole in the geyserite and took a core sample. Inside the formation were the remains of once living trees! When this geyser began actively erupting there were several small trees close by. The spray from the geyser hit the trees. Eventually, enough silicon dioxide was deposited on them that they began to bed and slump closer and closer to the geyser. With a little imagination you can make out the shape of these trees.The large blunt shape near the center of the feature is most likely a tree stump. Grotto Geyser erupts about every eight hours splashing up to 10 feet. 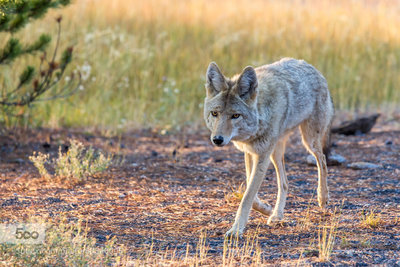 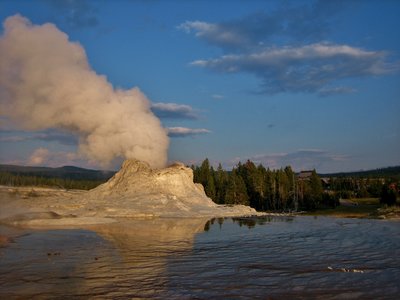 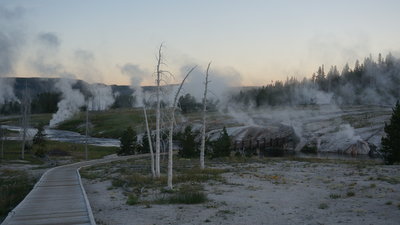 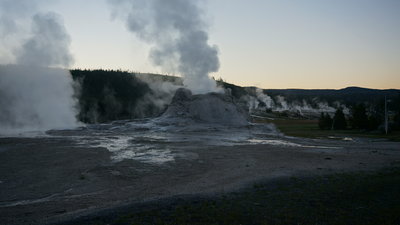 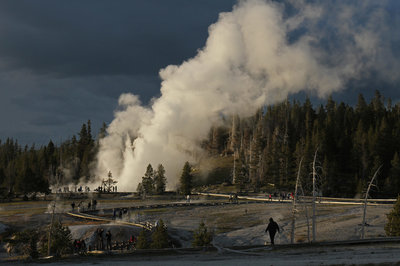