“A rugged path twisting through the lowlands of Saguaro's Tucson Mountain District. ”

One of the primary access points into the Tucson District side of Saguaro National Park, Thunderbird cuts a rugged path through the eastern foothills.

The trail begins a few hundred feet from the Camino del Cerro parking lot, breaking away from Sweetwater. Look for a signpost and a trail register, which is a good idea to sign, especially for solo hikers. Thunderbird is initially a fairly wide dirt singletrack, littered with rocks and occasionally technical. Verdant plant life surrounds the trail, with the park's signature saguaros stretching out in all directions.

Circle around the west end of a valley filled with cacti, with a view of Tucson beyond. After a brief incline, the trail makes a quick descent, leveling out again around the half mile point at the valley's bottom. An empty signpost marks a split in the trail a quarter mile in, stay right to keep on track.

Once in the valley, Thunderbird is more or less flat for the next three quarters of a mile. Eventually the path comes to one of the area's several abandoned miles. While it appears that a singletrack heads off to the right, it eventually connects to a nearby resident's back yard, so turn left to continue on course. The trail slowly begins to narrow at this point. Plants also start to close in; be careful around prickly pear and cholla cacti grabbing at passing legs. A few rocky sections, heading in and out of a narrow wash, follow before reaching Brittlebrush.

While trail signs mark most intersections, the one for Brittlebrush is missing. Look for a rock cairn on the trail and a new singlepath climbing to the left. Veer right to stay on Thunderbird, which begins another descent, milder in grade but bumpier than before thanks to a greater amount of trail debris. Some parts can be moderately technical, so pick footing carefully to avoid a fall.

Thuderbird meanders between cacti and up and down the ridges of foothills for about a half mile further before coming to an end at the intersection of Cactus Canyon and Gila Monster, the latter of which is really a continuation of the same trail. The sign for Cactus Canyon is set a few hundred feet away from the intersection for some reason, so look left from Thunderbird to see it, next to an orange fiberglass trail marker. A small rock cairn can help in finding the intersection, along with using the GPS track available here.

With both desert and mountain areas, including the sky island of the eastern district, Saguaro National Park is home to an impressive number of plants and wildlife.

Over four hundred plant species call the Tucson District home. The most prominent are the saguaro cacti which give the park its name. Living well over a hundred years and growing forty to sixty feet tall, they live exclusively in the Sonoran Desert and can be seen by the thousands here. Arms won't grow until the plant is 75-100 years old. Ocotillos, cholla, prickly pear, creosote, mesquite, and palo verde are common sights.

Many animals associated with the desert can be found on the trails. Visitors may see roadrunners, horned lizards, Gila monsters, kangaroo rats, and collared peccaries. Owls and woodpeckers may fly overhead, with some making their home in the saguaros. Tortoises are uncommon, and give a wide berth if coming across one of the park's six species of rattlesnakes. 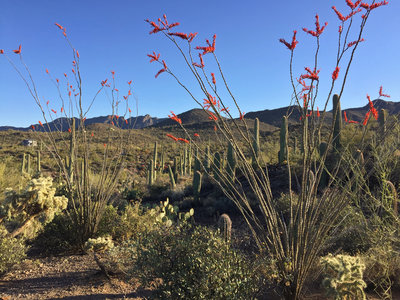 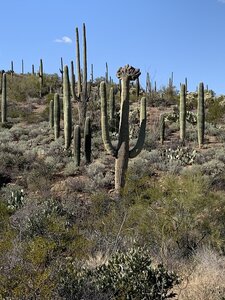 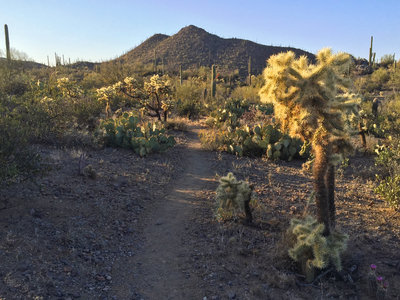 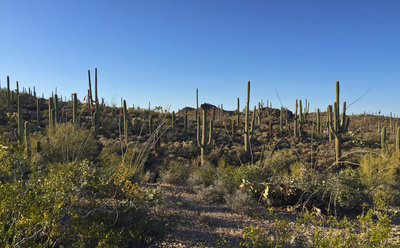