“A challenging and spectacular trek over 15,000-foot Salkantay Pass towards Machu Picchu. ”

Do your homework on the permits that are required for the places you intend to go. If you travel through an outfitter they should sort that all out for you, but if you go by yourself, educate yourself on this in advance. Along the trail there were several areas where the trail passes through a homestead, and it was clear that some arrangement existed with the guides to allow us to pass. Some areas (like Machu Picchu itself) require prior planning and you have to show your passport to get in.

The Salkantay route to Machu Picchu travels along minimally developed routes in the Andes and offers a rare glimpse of Machu Picchu that most visitors never see. It is wild and vast, and a spectacular route. There are times when you can look 360 degrees around you and see absolutely nothing man-made for miles in every direction. A series of surprisingly comfortable stone lodges provide an alternative to backpacking, and these lodges serve as the terminus of each section of the trail as it is defined here.

Part of what is great about this trek is that you travel through multiple ecosystems, and experience a variety of flora and fauna along the way. There will be rivers, streams, wildflowers, pastures, and mountains, mountains, mountains everywhere you look.

This is an adventure in many senses, including culture. This is the land of the Quechua people, and you'll see evidence of their culture both along the trek and in Cusco or whatever city serves as your gateway to this area. You'll also see evidence of the ancient Inca in the form of their stonework, some of which is still evident along this route.

This area is relatively unspoiled but may not stay that way due to its emerging popularity. Check it out before it changes too much.

This trail includes climbing over Salkantay Pass at about 15,000 feet, and most people will feel the thin air. The guides were watchful for signs of altitude sickness and administered oxygen as needed. Some people opted to take the medicine Diamox proactively to help avoid altitude sickness.

About an hour and a half past Salkantay Lodge, we improbably came across a gift shop run by the Quechua people, where you can buy some locally made products. If you want to buy something local, bring some local currency. Bartering is OK, but once a deal is struck it is considered very bad manners to not complete the deal.

Trekking poles were helpful on the trail at times at some steeper points, and due to mud which made things slippery at times.

This is an area where North Americans need to be careful about the water. We had no issues at the lodges, but consider getting a proactive prescription of the antibiotic Cipro, which will greatly shorten your recovery if you do get sick.

The Salkantay Trek to Machu Picchu has been subdivided here into 5 segments, described below.

Marcocasa to Salkantay Lodge
Stunning views of the snow-capped mountains of the Andes are to be seen almost the whole length of this segment, along with rolling green foothills and generally interesting terrain. Much of the trail follows the route of irrigation systems put in place by the Incas, which are still operational.

Salkantay Lodge to Wayna Lodge
This is a beautiful but physically demanding section of the trail, due to both elevation gain and altitude. This segment includes climbing over Salkantay Pass at about 15,000 feet, and most people will feel the thin air. The guides we traveled with were watchful for signs of altitude sickness and administered oxygen in a couple of instances.

Once on the other side of the pass its a long descent to the next lodge through a changed ecosystem. On this side and up this high, it's cloud forest, and there is lots of moss on the rocks. We saw a couple of chinchillas on the way down. The beautiful views of the stark mountains continued most of the way down to the next lodge.

Wayna Lodge to Collpa Lodge
This leg continues the descent through the cloud forest. In this climate zone, there are lots of wildflowers, including native orchids, fuchsias, begonias, lilies, lupines, and others. Hummingbirds flit across the path, there are often finches and brightly colored tanagers in the trees and visitors can hear frogs "singing" in the distance. Any local guides will know all of the local plants and birds.

The trail is all downhill and when our group visited in late March, things were quite muddy. Those who are experiencing altitude-related symptoms will most likely feel much better as you descend to lower altitudes.

Collpa Lodge to Lucma Lodge
This section of the trail descends gradually along a relatively easy path, following the river through passion fruit trees and, closer to Lucma Lodge, tobacco plantations.

We saw a variety of butterflies on this trail, including some stunning iridescent blue ones that crossed back and forth in front of us but didn't land long enough to photograph. We saw an amazing fluorescent yellow caterpillar along the trail, and numerous wildflowers. Because we were making the journey at times through groves of passion fruit trees, we saw lots of passion fruit flowers and the fruits themselves. There were also a lot of bromeliads in the trees around us for much of the way.

Lucma Lodge to Machu Picchu
This section of the trail leads from Lucma lodge to, in our case, the train station at Hidroelectrica. Trekkers can continue on by foot, or take the train to Aguas Calientes (as we did). Most of the trail is dense with vegetation, which closes in on the trail from time to time. There is a great variety of plant life here, and overall the impression is jungle-like.

The highlight of this section of trail is the views of Machu Picchu at a distance on the other side of a lush valley. This is a view not often seen by visitors, and it places the site of Machu Picchu in context with the surrounding terrain. Bring your binoculars so you can see it better.

Trekking poles were helpful on the trail at times at some steeper points, and due to mud which made things slippery at times.

What really made this great was getting our first views of Machu Picchu itself, which is one of the highlights of the Salkantay route.

Fauna: We saw condors and chinchillas along the route, and there are hummingbirds, finches and brightly colored tanagers in the area.

Flora: We saw a variety of butterflies, including some stunning iridescent blue ones. On some sections of the trail there are lots of wildflowers, including native orchids, fuchsias, begonias, lilies, lupines, and others. There were lots of passion fruit trees, and also a lot of bromeliads in the trees around us for much of the way.

This is an area rich in history, and if you have a guide there is lots to learn from them. The Inca were the rulers, and the Quechua were (and are) the indigenous people of the area. Many ruins remain all through the area, including Machu Picchu itself, and there are stories for each such area. The history of the Spanish conquest of the area is inescapable as well. 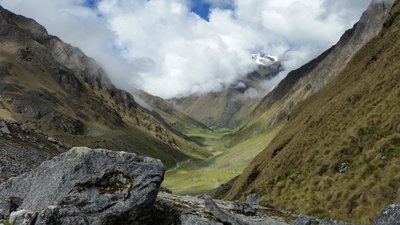 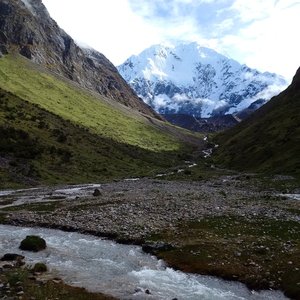 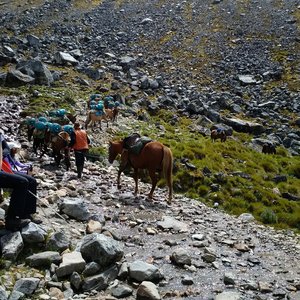 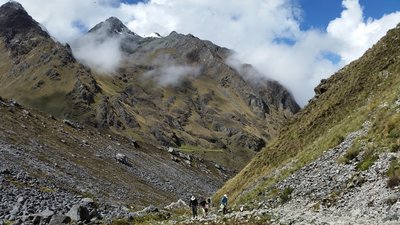 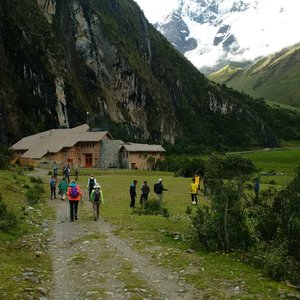 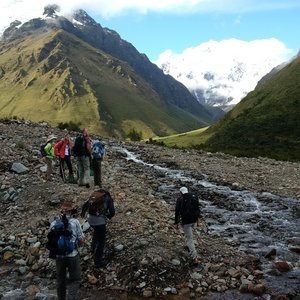