“A route to the tallest peak in the Pine Valley Mountains with varying terrain and amazing views. ”

The Oak Grove Trail is practically cut into a cliffside, which makes for amazing views along the first two miles of the route as the trail rises above the landscape and opens up for miles out onto the Colorado Plateau and lots of beautiful red rocks.

There's a creek crossing at around mile 3, but the creek never gets too deep or swift. Also, there is no water along these first 3 miles of the route, and if you start after the sun is already up, the first 2.5 miles are steep and exposed to the sun, and it can get really hot quickly. Even before the sun is up, it is warm down near the bottom, but up in the meadows near the top, it can still be really cold because of elevation, so just bring appropriate extra clothing.

For those visiting during fire season, the road to Oak Grove Campground gets seasonally gated a few miles from the campground (near the nature walk/Leeds kiln area). To avoid disappointment, call the Dixie National Forest office in advance or check the kiosk as you enter the National Forest boundary from Leeds.

From the Oak Grove Trailhead, the trail starts up following an ephemeral stream bed. This is a steep trail that quickly changes between two main ecosystems - a dusty reddish desert where the trail crosses ephemeral stream drainages and passes desert foliage, and then the trail slowly crosses over into a lush pine forest with wildflowers and occasional leftover snowbanks in the summer. The switchbacks that cut into this steep mountainside were constructed a long time ago, but have been very well kept up, and the trail is easy to follow.

Initially, the trail starts ascending slowly as it leaves the Oak Grove campground and starts up a small drainage. The trail then breaks away from this drainage and heads for a steep ridge that leads up into the heart of the Pine Valley mountains. At this point, the switchbacks begin, but so do the great views. Looking back to the east, one can start to see the Colorado Plateau and red rock formations in the distance.

These views just keep getting better as the trail ascends and allows for more uninterrupted views of the area. Eventually one can even see down into St. George and parts of the red rocks of Snow Canyon State Park. There are also some impressive granite cliffs just above and along the trail itself, within the Pine Valley Mountains, and the trail passes by some huge granite boulders as well that have fallen from the cliffs.

Eventually, the trail reaches its apex and drops down into a lush evergreen forest with plenty of shade and quickly meets up with the Summit Trail. From this junction, the trail starts going west and goes through a forested meadow and eventually rises up and goes over a small rocky pass and then drops down to a small stream called Further Water. This can be a gorgeous part of the trail in the early morning in the early summer. Behind the stream is a wide open meadow that, at least when I went, looked like it was steaming because of the fog coming up from the stream that covered the meadow. You do have to cross the stream at this point, but it is narrow and there are spots with rocks that you can jump across to keep from getting wet if you're worried about that.

Once in the meadow, the trail meanders and in places cuts down into the ground a foot or two but eventually heads back into the forest. Once in the forest, the trail continues to the west going towards Burger Peak and the rest of the Pine Valley range, but to get to Signal Peak you must break off the trail to the southwest. It is best to do this part with a topographical map of some sort, or just try to be always heading up to higher ground to reach the peak.

There are faint trails throughout this section, as many scout groups and other people like to get to Signal Peak, but there is no single defined trail. There can be lots of deadfall in sections, and rocky portions but it's not too difficult to reach the peak. There are some good views from the peak, although most of the views that would be the best are obscured by the trees that populate nearly the entire peak. However, there is a summit register, and it's a nice destination even without amazing views from the top. From this point, you just return the way you came to get back to the Oak Grove campground.

Sego Lilies, other wildflowers, and deer.

I read somewhere that the peak is called Signal Peak because during World War II beacons were placed on the peak to signal to planes crossing over. 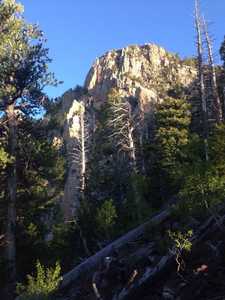 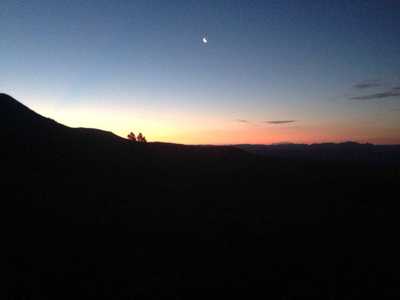 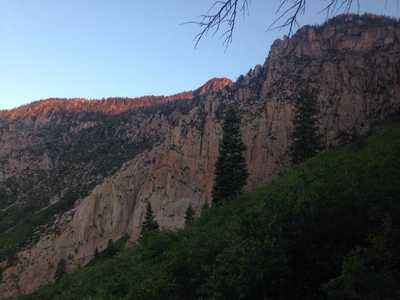 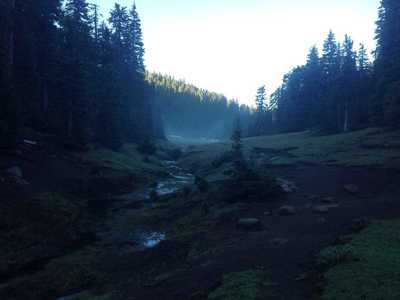