“A magnificent peak just outside the main entrance of Crater Lake, with sweeping views of the area. ”

Hike along several miles of the Pacific Crest Trail (PCT) before scrambling up Union Peak, towering over Crater Lake National Park. This trail is not as commonly used, as it lies outside of the park entrance, and so is not as well known. If you're lucky, you may catch the occasional thru-hiker making their way into the park!

Union Peak is the core of what was an old volcano eroded by glaciers during the last Ice Age. It is the most prominent feature in this section of the park, its peak being 7,698 feet above sea level and over 1,000ft above its immediate surroundings. The upper 800 feet of the mountain stand as a rock spire above a ridge-like base which is the drainage divide between Union Creek to the north and Red Blanket Creek to the south, both streams being tributaries of the Rogue River.

Plan ahead for time, as this route takes at least 4 hours. You can expect the trail to be snow-covered from October to early July, however, conditions vary somewhat from year to year. See Crater Lake Current Conditions for more information.

The trailhead is located across Highway 62, on the opposite side of the highway from the Crater Lake National Park entrance at Mazama Village. Look for a road sign indicating parking for the Pacific Crest Trail (PCT).

Start on the PCT: Highway 140 to Highway 138 (near Cascade Crest), hiking several gentle miles with virtually no elevation gain. Eventually, a fork in the trail with a well-maintained sign points you in several directions. Going straight here would keep you on the PCT, so take a right onto the Union Peak Spur Trail, which leads to the summit.

After branching off of the PCT, this trail moves through a lodgepole pine forest with very moderate grades. The peak materializes instantly, as if from nowhere. Upon approaching Union Peak is when the workout begins! Start off stair-stepping up large rocks, and before you know it you'll be scrambling up the side of the peak. From the top of Union Peak comes panoramic views of the surrounding area. You'll be able to see some of Crater Lake's Caldera, but not the lake itself. Just don't look down!

In 1853, the Nye party drew a crude map of the area as they moved around the rim and they called the lake simply Blue Lake. En route to Jacksonville, Chauncey Nye and three others noticed a very rugged peak which they climbed and named Union Peak. A majority of the group favored the Union cause in the Civil War and they hoped the name of this volcanic plug would never change. Following the usual slow route of travel to Jacksonville, Oregon, the Nye party reported their discovery and on November 8, 1862, in the Oregon Sentinel, the first printed article about the Lake appeared. 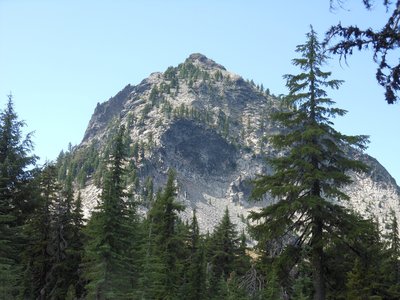 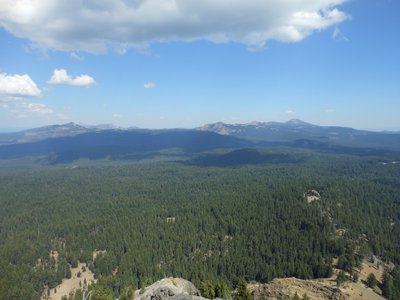 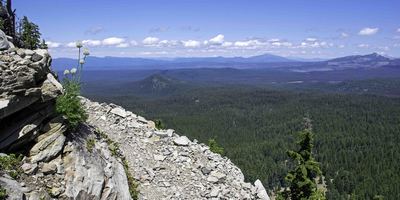 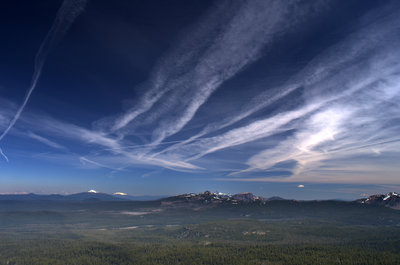 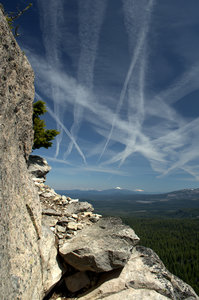 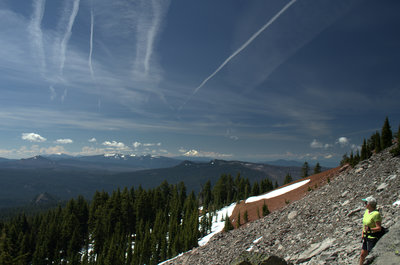