“Traverse the gypsum dunes of White Sands National Monument on this otherworldly trail. ”

Visitor passes are $5 for adults and are valid for six days.

Except for December 25, White Sands is open year round. Park hours vary throughout the year, generally from 8 am to 6 pm. Dunes Drive is occasionally closed due to missile testing at the adjacent range, blocking access to the trail. Weather closures occur on occasion as well.

Hours and closure information can be found at nps.gov/whsa/planyourvisit/….

Encompassing 275 square miles of desert in New Mexico's Tularosa Basin, White Sands is the world's largest gypsum dunefield. The White Sands National Monument covers most of this area. The Monument's Alkali Flat Trail crosses the western portion of the protected area to the flatlands, climbing and descending hundreds of dunes.

More of a signed route than a trail in the traditional sense, Alkali Flat follows a series of markers. There is no defined path to follow other than moving from marker to marker. Visitors willing to brave this unique trail are rewarded with an otherworldly experience. Dunes stretch out for miles in every direction, with the San Andreas and Sacramento mountain ranges bracketing the monument in the distance. Constantly shifted by the winds, the shape of the trail can change day by day.

The dunes of White Sands are scenic but can be dangerous to the unprepared. Visitors have died on the Alkali Flat Trail. The primary hazards are heat and dehydration.

Summer temperatures average in the high nineties, so plan on visiting in the morning or late afternoon during the warmer months. Winters are more comfortable, with highs in the sixties. The temperature can drop twenty to thirty degrees in the evening, though the monument closes before dusk. If there is any doubt of whether you can return to the trailhead before dark, turn around immediately - the markers would be very difficult to find in low lighting, even with a powerful headlamp.

Even though the trail is less than five miles, bringing water is strongly recommended and essential during the warmer months. Hiking on sand is tiring, and it can sap energy faster than most visitors expect.

Be sure to sign in and out in the visitors' log at the trailhead as an added safety measure.

Alkali Flat starts at the very back end of Dunes Drive, near the northwest corner of the loop. Look for a trailhead sign near a parking area on the west side of the road.

As mentioned above, Alkali Flat isn't a trail in the traditional sense. Instead, hikers will be following a series of orange markers across the dunes. Spaced no more than six to eight hundred feet apart, they stand out well from the white sand and are generally easy to locate. With that said, if the next marker isn't visible, turn around. Once the trail moves past the first couple dunes, there will be very few visual reference points other than the mountains, and nothing to indicate the direction of the parking lot. There are also a few shorter, white and orange markers, and some posts showing mileage and the turnaround point. These are almost always co-located with the larger orange markers.

One helpful aid is the tracks of visitors (and ranger vehicles) who have taken the trail previously. Tracks are usually well-formed, and last well, except in the windiest seasons. Look for tire treads to show the easiest way to take on steep sections.

The first few hundred feet of Alkali Flat are through a flat basin between dunes. After passing another trailhead/warning sign, the markers split off to the west and northwest. Clockwise is the recommended direction, so head left. For the next two miles, the trail follows the markers up and down dunes. Winds are generally out of the west, meaning the steeper side of the dunes face east. It's a steep hike up in many cases, so look for easier routes around the sides. Slant climbs can help as well.

A water tower and some large buildings are visible to the northwest around the mile and a half point. This is the National Radar Cross Section Test Facility, part of the White Sands Missile Range. Barely visible in the distance beyond are the hangars and buildings of White Sands Space Harbor, one of the alternate landing sites for the space shuttle program.

Eventually the dunes flatten out to the trail's namesake alkali flats. These flatlands stretch all the way to the base of the San Andreas mountain range, about ten miles away. While a nice relief from the constant climbing and descending, the flat section doesn't last long; the trail reaches its apex near the two and a half mile point and heads back to the east. The route back is about the same, with the advantage of the steep sections now being in the form of descents. Nice views of Sierra Blanca can be had towards the northeast. Eventually, the trail converges back at the starting basin.

As expected, plant and animal life is sparse in the rough environment of White Sands. Desert grasses and shrubs take hold in some areas, with roots strong enough to create columns of sand as the dunes shift around them. Mesquite trees grow in some of the flatlands.

A surprising variety of animals live in White Sands. Beetles, snakes, and lizards are the most common and aren't hard to find. Hawks soar overhead, and owls can be found hunting prey. Mice and several types of foxes make their home here as well. Larger predators, like coyotes and bobcats, are not unheard of.

One especially unique feature to the area are species of mice, insects, and lizards who have evolved white coloration to camouflage them against the gypsum dunes. These animals are endemic to White Sands and aren't found anywhere else in the world.

Wedged between the rugged mountains and arid desert of southern New Mexico, White Sands has a storied history. After several failed attempts to protect the unique area as a game preserve or national park, Tom Charles, a civic booster from nearby Alamogordo, was able to rally enough support to convince President Hoover to declare it as a National Monument in 1933. Charles would go on to be the first custodian of the monument, and after his retirement, its first commercial vendor. It continues to be a popular year-round attraction for hiking, camping, animal watching, and sledding.

Surrounded by the White Sands Missile Range, Holloman Air Force Base, and Fort Bliss, the area has long been home to military activity, including the nearby Trinity Site. Space development is also a part of local history. The trail is only a few miles from White Sands Space Harbor, part of the shuttle program, and just over the mountains lies Spaceport America, the world's first commercial spaceport. 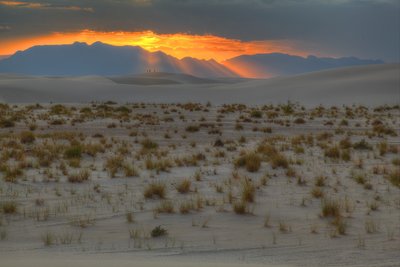 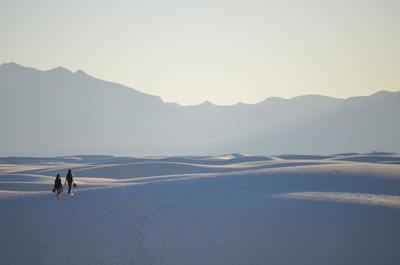 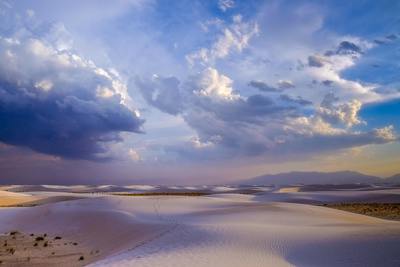 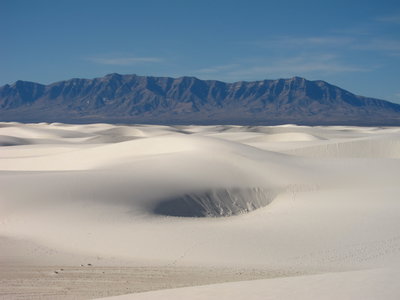 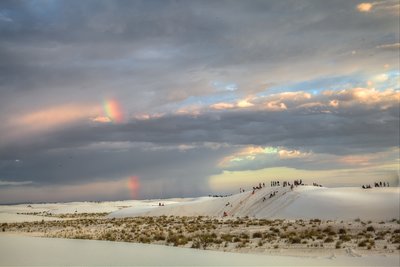 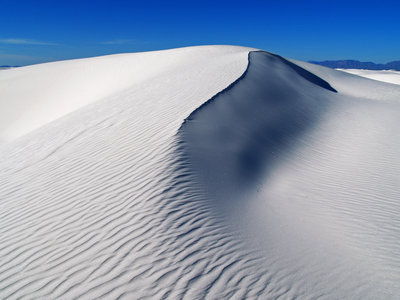 All Clear 23 days ago See History