Government Canyon State Natural Area is open Friday through Monday, 7 am to 10 pm. Some additional openings are found around major holidays, and there may be closures after inclement weather to protect the trails. Check their website for updates.

Admission for visitors 13 years and older is $6. Overnight camping is available.

Pets are allowed on the frontcountry trails only (Savannah Loop and Lytle's Loop).

Stretching across Government Canyon's backcountry, Sendero Balcones cuts a path along the top of the Balcones Escarpment. This rough, rock-strewn trail requires constant attention to pathfinding and can be very mentally tiring.

The track splits off from Recharge Trail at a signed map and a trail marker just east of Bluff Spurs. It is a rocky, moderately technical singletrack, at times widening to doubletrack. The rocks come in varying sizes. While they don't require any climbing, they often create hazardous footing throughout Sendero Balcones' four-plus miles, and therein lies most of the challenge of this route. It requires an eyes-down approach to hiking and a slower pace than other area trails. On the up side, nearly the entire trail is covered by tree canopy, providing plenty of shade from the scorching Texas sun.

The path makes a steady, low-grade climb up to the top of one of the Balcones' many hills over its first mile. The second entry to Bluff Spurs is found about a half mile in, at another map/marker intersection. From here, it's a remote-feeling mile and a half to the next intersection, with a few brief smooth segments breaking up the constant rock hopping and dodging. Thanks to the thick tree cover, the view doesn't change much, but the plant life makes the air fragrant and cool.

Wildcat Canyon Trail and Far Reaches Trail come together just before the two mile point. The high point of the trail is about a half mile after, and a noticeable descent follows. The signed turnoff for Twin Oaks Trail is also the edge of the Protected Habitat Area, which takes up the northeast section of the park. Open September through February to pedestrians only, these trails are similarly rocky but may provide more opportunity to view undisturbed wildlife and plants. Sendero Balcones will follow the western edge of the Habitat for its remainder.

Watch for a flat rock creek crossing a little after the three mile point, near the first turnoff for Black Hill Loop. The last climb follows soon thereafter. A few faint false leads will split off to the left; keep an eye out for the brown trail markers to keep on track.

The second turnoff for Black Hill Loop is easy to miss, as the signs face away from the trail. Look for the Habitat Area gate to help out.

Sendero Balcones ends about half a mile later, turning south and becoming the northern end of Joe Johnston Route.

The Texas Hill Country is well known for its abundant tree life. Government Canyon exhibits a number of these varieties, including mountain laurel, Ashe juniper, mesquite, and live oak. Birds and deer are the most common animals encountered in the area. 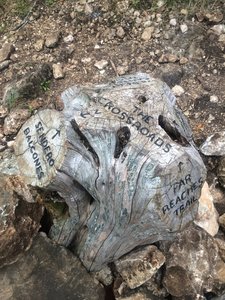 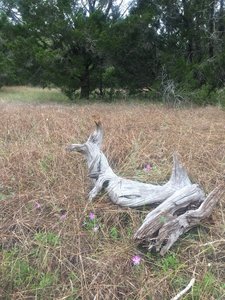