“A moderate hike with expansive views of the surrounding formations. ”

From the southern trail junction, bear right at the sign to begin the climb along a moderate grade that eventually passes the tip of a prominent, white-capped red point. After about two-thirds of a mile, the slope eases, and for the next half mile, the trail passes through a mellow piñon-juniper forest that imparts the sense of a garden. A little more than a mile in, the highpoint of the hike is reached. This is a fine place to enjoy lunch.

If the day is hot, just over the highpoint is a small, shaded alcove along the trail. Just off the trail to the right, an open ledge makes an excellent viewpoint. On clear days, the La Sal Mountains east of Moab are visible above the typical Mancos Formation mesas. To the northeast is flat Horse Mesa, capped by the Carmel Formation and swinging further left, the domes in the Navajo Sandstone stand out, especially in low early evening light when they cast long shadows.

During the long descent that follows, the Frying Pan, essentially a vast canyon, is laid out in full view of the northbound hiker, with a variety of interesting Kayenta erosional structures visible in the distance. The trail continues down the slope of the Kayenta, occasionally dropping from one layer to the next. It is more than a mile from the top to a sandy wash crossing.

A worthwhile diversion leads to the right to the top of a high pour-off. This drainage forms the handle of the Frying Pan and extends into the Navajo Sandstone. Under the dryfall is a series of tanks in the bedrock below. They are quite evenly spaced, and the line of eight or nine of them is unusual.

On the main trail and on the other side of the wash crossing, the trail climbs about half a mile to the base of a prominent pillar. Just ahead, a good viewpoint looks into the canyon to the west and a wall of Wingate solution cavities. From the pillar, good views to the north once again emerge.

Cohab Canyon shortly begins to appear to the west. The descent to Cohab Canyon is often on slickrock, but it doesn’t take too long to travel. A little more than halfway down, the rock is littered with sandy Moki marbles, both those released by weathering and some still embedded. The northern trail junction is soon reached above the floor of the canyon.

Piñon pines are not only widely distributed across the West, but they are also striking and utilitarian to a degree perhaps not attained by any other plant in their range. Pinus edulis, the one found in Capitol Reef, is the only piñon with needles in bundles of two.

Its seeds are the claim to fame for P. edulis. Finer restaurants usually call them pine nuts when they grace a dish, but when they are sold along the highways of the Southwest, the banner hanging on the old van most often just says “Piñon.” At 3,000 calories per pound, piñon nuts pack a nutritional wallop that made them very important to the Fremont and later Native American cultures. 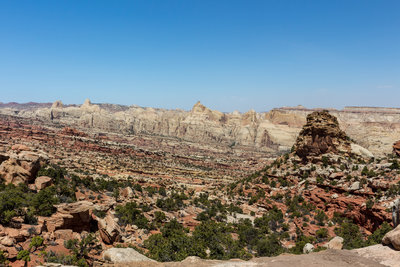 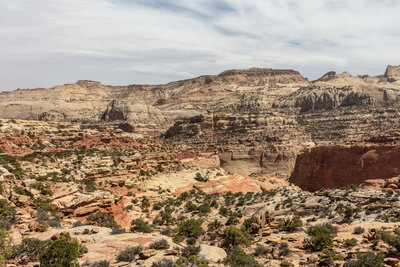 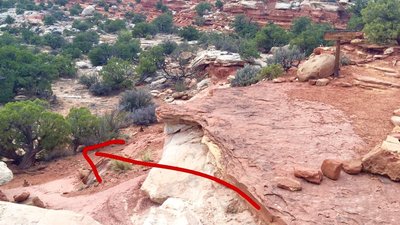 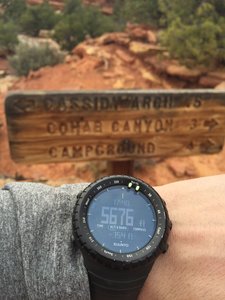