“Glorious high mountain trail, through meadows, past creeks and lakes, over passes, with high, rugged peaks all around. ”

This section of the CDT begins and ends at trail junctions, several miles from any roads.

As shown here, the trail begins in the high grassy meadows with patches of pines, around North Fork Lake. From North Fork Lake, the trail climbs to Hat Pass at the 2.6 mile mark. Like all the passes along this CDT section, Hat Pass is a treeless, grassy, boulder strewn pass.

From Hat Pass, the trail descends into a more treed stretch, crosses a major creek, and then climbs to three unnamed passes in a row at the 6.2, 7.0, and 7.8 mile marks. There are great views of the rugged Wind River Range peaks from these passes, especially the last one. Descending from the last unnamed pass, one is in Bald Mountain Basin, a treeless, rocky, grassy basin, dotted with many small lakes, and surrounded by peaks, including Angel Peak on the Continental Divide.

Leaving Bald Mountain Basin, the trail descends into a short treed section, crosses Pole Creek, passes a couple lakes, and climbs to Lester Pass at the 13.0 mile mark. Descending from Lester Pass one comes to a major trail junction with the trail to Island Lake/Titcomb Basin and joins it for a short ways. Then leaving the crowds bound for Island Lake behind, the trail winds around past trees, lakes, and meadows, and comes to Fremont Creek, crossing it on a sturdy bridge.

After Fremont Creek, the trail climbs gradually to Lower Jean Lake, set in a rocky, grassy basin with scattered trees, runs along the lake high above it for almost a mile, crosses its inlet creek a couple times, and heads to Upper Jean Lake. Continuing to climb gradually, the trail is now in treeless, rocky, grassy terrain for the next four miles. Upper Jean Lake is passed, and then another small lake, and then the trail reaches a high point with a view of Shannon Pass ahead, at the 21.4 mile mark.

But instead of going over Shannon Pass, the trail veers left/west and heads to Elbow Lake, the largest lake in a treeless, grassy, rocky basin dotted with many lakes. At the 23.3 mile mark, the trail descends out of the Elbow Lake Basin, winds around, and makes a final descent to cross the upper reaches of the forested Pine Creek Valley and Pine Creek.

After crossing Pine Creek, the trail climbs out of its forested valley into the rocky, treelless, grassy high lands again. Then a short mile brings one to Summit Lake where this CDT section ends. 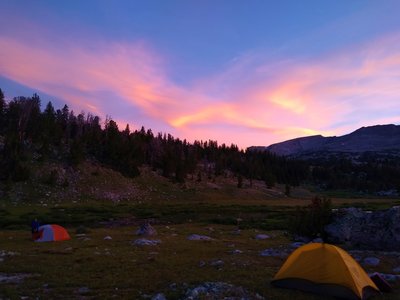 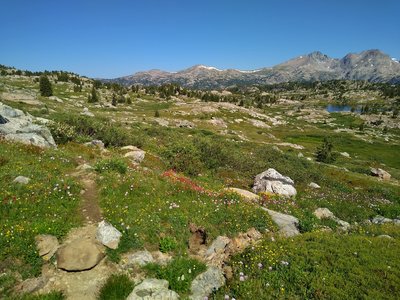 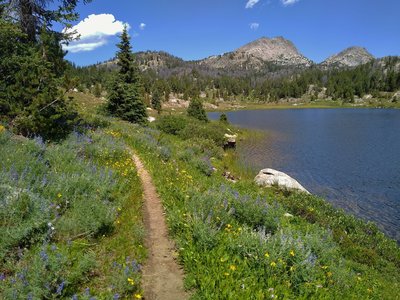 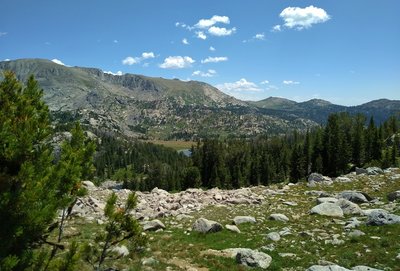 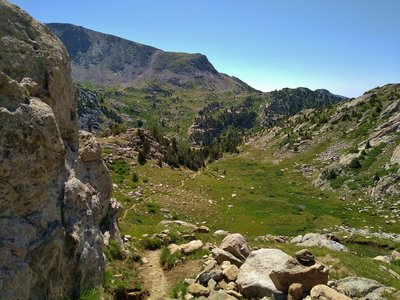 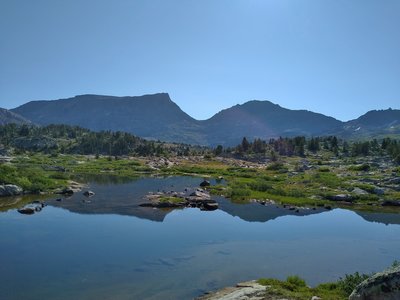