“A great trail displaying wonders of both the Mojave and Colorado Deserts. ” Family Friendly It is easy for children to do small segments of the trail and still get a great view of the desert landscape.

Pets are not allowed on the trail; they are only allowed within 100 ft of campgrounds in Joshua Tree. Expect to pay a $25 entrance fee unless entering from Black Rock Canyon. For overnight trips, you must register at one of the Backcountry Boards and hold on to the bottom half of the yellow permit. No natural water springs or streams so bringing enough water or stashing it on the trail is a must.

The trail is best taken from west to east so that there is a net descent rather than a net ascent. The first part of the trail is very sandy with an uphill making for a difficult ascent, but once you reach the highest point on the trail of about 5200 ft, do not get your hopes up because you'll be going up and down a lot more with more climbs and descents.

IMPORTANT: The trail marker at the junction between Upper and Lower Covington Flat citing the distance to Keys View Rd as 7 mi is incorrect, it is actually about 9.5 miles to Keys View Rd. The most difficult descent of the trail lies between 10.5 and 12.5 miles where there is steep descending and a few switchbacks on a vegetation rich part of the trail; pants are advised over shorts. If stashing water for an overnight trip, a good location is Keys View Trailhead near Juniper Flats Parking Area to California Riding and Hiking Trail Connector because it is almost exactly halfway on the trail. For camping, though, plan on either camping before picking up water so that you do not camp near the road or a few miles after at either Ryan Campground or further.

You'll not see many people on the trail except near the trailheads and Backcountry Boards. After passing Ryan Campground, you'll remain in Juniper Flats until you go through a mountain pass which involves about 200 ft of very light and gradual climbing. When going through the pass, you'll hike near a rusted water pipe, which you cross over a few times as well. This pipe is probably what was used to pump water 3.5 miles from the spring at Ryan Ranch to the local mine.

The hike is then extremely flat with a slight downhill which will take you until about the 30-mile mark, at which point you turn left after crossing Pinto Basin Rd and crest over until you begin to see into 29 Palms. The trail then runs parallel to Pinto Basin Rd until you cross over a small one-lane paved road just after the 33-mile mark. Then the trail makes a hard right to go around a small hill, and the trail becomes overgrown with green vegetation, but there are trail markers with arrows showing the way to go.

After going around the hill, the trail runs parallel to Park Blvd and along the trail, there are manhole covers with a label reading High Voltage, Southern California Edison. Depending on the season, the trail is then bombarded with large caterpillars, so watch your step. The trail then makes a right, and you reach the end of the trail.

There are lots of wildflowers throughout the entire trail of varying colors even just popping up in the trail. Towards the end of the trail (if heading west to east), there are thousands of large caterpillars crawling on the trail so watch your step, but when they hatch, it will be a beautiful sight with so many butterflies. 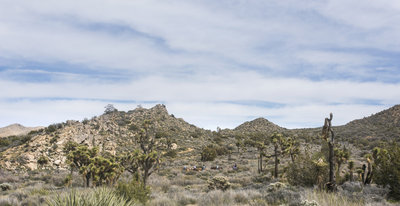 South Fork of the Santa Ana River via Dollar Lake