“A short, very steep trail to the base of spectacular 150-foot Osprey Falls. ”

This short trail contains some of the steepest switchbacks in Yellowstone. Watch your footing on the way down and save some energy for the hike back up.

The first 1/2 mile the trail travels through burned forests along the top of the canyon. It then begins a series of switchbacks steeply descending into the canyon, dropping 300 feet in the next .4 mile, and then another 350 feet in the following .2 mile. The latter section is some of the steepest trail in Yellowstone.

Notice the unusual rock formation across the Gardner River, which resembles a row of fence posts. This is "columnar basalt." Basalt is a volcanic rock poor in silica but rich in iron and magnesium, which accounts for its dark color. Deep beneath the earth's surface, at temperatures approaching 2200° F, basalt is in a liquid state. This cliff is the remains of a basalt lava flow that welled up and spilled onto the surface over 200,000 years ago. The liquid or "molten" basalt may have traveled many miles before hardening. As the lava flow cooled, it solidified and contracted, causing it to crack into many-sided columns. The columns were later exposed by river erosion. If you could see the flow's flat upper surface, it would resemble a honeycomb.

In 1879, Park Superintendent Philestus Norris named this Sheepeater Cliff in honor of the Sheepeater Indians, who once inhabited the area. The Sheepeaters (or "Tukuarika" as they called themselves) were a subgroup of the Shoshone Nation. As far as we know they were the only Native Americans to make their year-round home in what is now Yellowstone Park. Many tribes, including the Blackfeet, Shoshone, Crow, Bannock and Nez Perce, occupied surrounding areas and entered Yellowstone to hunt, gather obsidian for weapons, and commune with its spiritual powers. However, they apparently found conditions within too harsh for permanent residence. In 1871 (the year before Yellowstone became a park), the Sheepeaters left to join the Eastern Shoshone on the Wind River Reservation, southeast of Yellowstone.

The last .2 miles the trail levels out and follows the Gardner River upstream to the base of 150-foot Osprey Falls. It’s impressive any time of the year, but for a real rush visit Osprey in June, as the snowmelt thunders through the canyon! 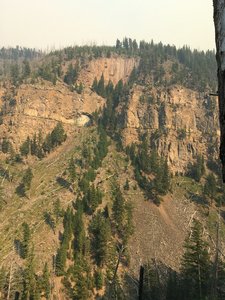 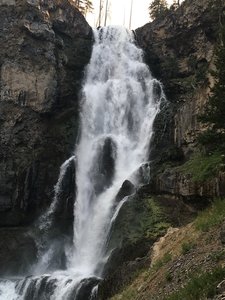