“A moderate hike to views from the Compton Peaks with amazing geology along the way. ”

Family Friendly Not overly strenuous, kids will enjoy a great sense of accomplishment at the summits of both North and South Compton Peak.

This hike stands out as one of the most accessible opportunities to see some amazing examples of the geology in the park. It's hard to say what is more of a reward on this hike, the outcroppings of volcanic columnar jointing or the views from the Compton Peak overlooks.

To access this hike, use the Compton Gap parking area off of Skyline Drive. Head south on the white-blazed, AT: Potomac Appalachian Trail Club (PA/MD/VA/WV) that starts across the Drive opposite the parking area.

At the beginning of the hike, look for the exposed granadiorite rocks. This is only a preview of what is to come. After two-tenths of a mile from the Drive, the trail passes a basalt boulder off to the left. This is the first striking evidence of the Catoctin lava that forms the top of Compton Peak.

In the next tenth of a mile, you'll come across more boulders, in successively more extreme stages of disintegration, until you reach a point where the whole area, including the trail, is covered with broken rock. This is the trickiest part of the hike, but it's fairly short.

The high point of the AT: Potomac Appalachian Trail Club (PA/MD/VA/WV) on Compton Mountain is just under a mile from the start of this hike. Look for a concrete trail marker post and a trail that heads in both directions, right and left. Each side of the Compton Peak East Trail goes around two-tenths of a mile to a viewpoint.

Start off on the trail that continues to the right. After traversing the top of Compton Peak, the trail travels a short distance down the northwest slope. Be careful as the trail is rough and rocky here and near the end, the trail can be a little difficult to follow, keep an eye out for the blue blazes. The final viewpoint ledge is marked with a blue cross.

To the right, the pointed peak in the distance is on the Blue Ridge outside the park boundary. To the left of this peak, and significantly closer, you can see Skyline Drive on the near side of Dickey Ridge, which takes a sharp corner toward the right at Gooney Manor Overlook. Look for the FAA radio beacon tower that sits on the highest portion of Dickey Ridge. From there, the ridge dives to the right, toward the town of Front Royal.

Return the way you came to the other side trail heads off from the AT: Potomac Appalachian Trail Club (PA/MD/VA/WV). This section of the Compton Peak East Trail leads to an obstructed viewpoint that is fairly rough and rocky, and the last section of it is steep. Skipping this section of trail shortens the hike by almost half a mile, and lowers the total elevation climb by 230'.

That being said, ahead lies a great example of volcanic columnar jointing. This particular rock formation raised Henry Heatwole's interest in geology, as he characterized it, "from near zero to the threshold of enthusiasm." Who knows, it could do the same for you!

Continue following the blue blazes downhill to a boulder that sits ten to fifteen feet high. Clamber to the top for a view directly out into the Piedmont. The Blue Ridge heads to the right, with a portion of Skyline Drive in view, including Jenkins Gap Overlook. Straight out from this rock, The Peak rises beyond the near ridge. At the right of your view are the two summits of Mt. Marshall.

Head back down the boulder and follow the blue blazes to the base of the cliff and look up. The lava that hardened here cracked into many prismatic columns around 800 million years ago. The thrusting force that developed these mountains tilted the columns to their present angle. During subsequent erosion, the downhill side of the cliff crumbled away, so that you now look up at the lower ends of the giant prisms.

To finish the hike, head back to the white-blazed AT: Potomac Appalachian Trail Club (PA/MD/VA/WV), and continue back to the Compton Gap parking area.

Thanks to Larry W. Brown, for sharing this description. If you're interested in learning more details about great hikes, weather, camping / lodging, wildlife, and scenic drives, check out snp.guide/. 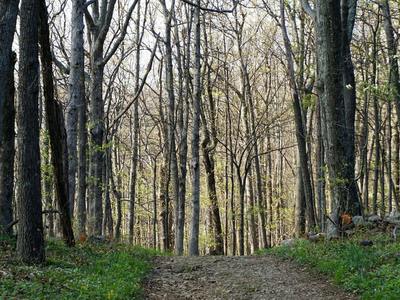 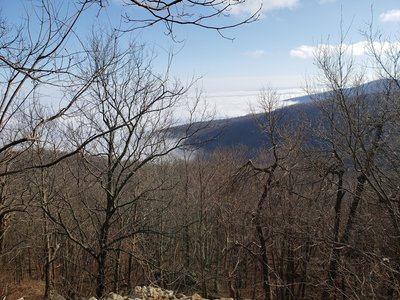 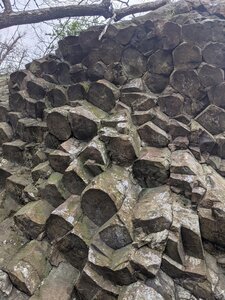 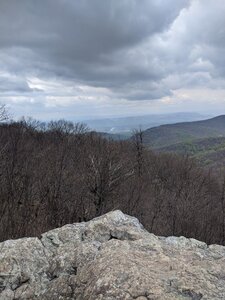 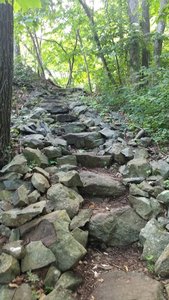 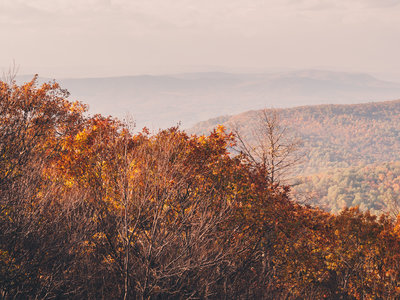 All Clear 14 days ago See History