“The route attached is part of several trails on the east side of Sky Meadows State Park near Paris. ”

Family Friendly There are a ton of activities put on by the park including star gazing and others.

This loop uses a great combination of trails on the east side of Sky Meadows that provides nice pasture travel and mountain vistas. This loop consists of part of the Rolling Meadows Trail (full loop is 2.5 miles) and the Lost Mountain Trail (2.2 miles).

Until you get to the bench mentioned above, you are mostly navigating through open fields with little or no shade along the way. You also pass along an active cow farm so there is a lovely, earthy smell in the air for a bit of the journey. Be aware of large biting flies.

Follow the trailhead access point to an intersection and take the left turn to head through the hay fields. You'll be starting out on the northern side of the Rolling Meadows Trail. There are two small creeks and one gentle climb up to the intersection of the Lost Mountain Trail, Washington's Ridge Trail and the Rolling Meadows Trail, which you'll have been traveling on.

At the intersection is lovely bench in the shade of large tree. The bench makes for a great place to rest before making the climb up the Lost Mountain Trail. This is also the perfect place for seeing across the valley over towards the other parts of Sky Meadows State Park including the route up to the Appalachian Trail (AT).

As you continue along your way, you'll move along the Lost Mountain Trail. After an initial climb to the most northern end of the trail, you'll be able to enjoy a gentle descent all the way back to your car. Grades will be mostly manageable, but there will still be a few sections requiring a bit of care.

At about the 3 mile mark, you'll find yourself again at an intersection, where you'll want to continue west on the Rolling Meadows Trail to finish the loop, and hike back to the parking area and your vehicle.

The only critters I have actually seen were squirrels and chipmunks. My last time out I heard something that sounded like a fox or larger animal coughing. I didn't stick around long enough to figure out what it was though.

There was a plethora of wild Blackberry bushes near the bench mentioned above. 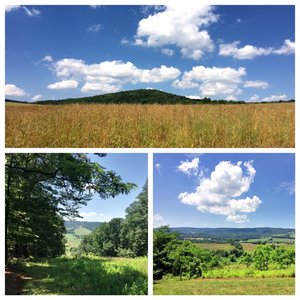