This route travels clockwise along the Halls Drainage to enter Lower Muley Canyon from the south. The twisting canyon is highly scenic, with deep undercuts, towering Navajo walls, low Wingate narrows, and welcoming forested benches. A difficult traverse along the Post Cutoff Trail completes the loop, bringing hikers back to their start at the Post.

This route can be completed as a very long day hike, or, much better, as an overnight trip. Backcountry permits are required for all overnight trips and can be obtained at the visitor center.

There are few sources of water in this area, and with the exception of the Muley Tanks which is reached by an optional spur at the southern end of this loop; most sources are unreliable.

Across from the corral at the Post Trailhead, follow the clearly visible, user-built path heading south, almost immediately passing through a fence. This sandy stretch of the Halls Creek Drainage travels nearly five miles over a mix of singletrack, road-trace, and a number of wash crossings as it follows the contours of the Halls Drainage. Eventually, this trail terminates right at the mouth of Lower Muley Twist Canyon.

At the mouth is the southern end of the Lower Muley Twist Canyon Trail as well as a worthwhile optional diversion along the Muley Tanks and Hamburger Rocks Spur that showcases some unique geology and visits the area's only reliable source of water (needs treatment). This detour adds just over 2.5 miles to the trip.

Continuing into the canyon, the way quickly tightens up, with impressively deep narrows as the drainage slices through the Navajo. About a mile and a half from first entering Lower Muley Twist, a side canyon on the left is worth a brief inspection. A little ways ahead is one of the hike's main attractions. Cowboy Cave, an enormous undercut with a sandy bench above the wash bed invites visitors to explore. The natural hedge of boxelder and Gambel oak that borders the alcove adds to its sanctuary-like appeal.

The next few miles are very nice. Vertical Navajo walls, over a thousand feet high, tower on the east side as the wash turns through the Kayenta Formation. At one point, several huge boulders have fallen into the wash, creating a minor obstacle. The easiest route through the rock pile is to stay left until a passage between the two biggest boulders appears to the right. The canyon delivers more beautiful formations including two more large undercuts before becoming slightly less scenic over the last few miles to the Post Cutoff Trail. At the right time in spring, this section is adorned with wonderful blooms.

The Post Cutoff Trail is generally signed, and the route is marked in cairns. A bit of minor exposure brings hikers to a sandy wash that continues on to climb up four hills. At the top of the first hill, turn around to look back at a good arch in the red streak in the Navajo. Approaching the last hill, the route passes through an area of many fish-hook cacti, along with abundant prickly pear cacti.

Experienced and well-coordinated hikers may proceed down the Navajo from this point without a second thought, but others will find the descent to be fairly, or even significantly, nerve-wracking. The route trends down to the right from the top of the hill and while there are sufficient cairns to stay on course, there are also a number of natural erosional remnants that look like cairns. Steep slickrock abounds, testing grip and balance.

The route does not always follow what at first glance would seem to be the logical path, especially when it turns north to bypass the first fin after less than half a mile of descent. A second fin is actually climbed rather than avoided, and the ascent is steep.

The subsequent descent is also steep and involves a short traverse that is not too difficult, but has dangerous exposure. When, after about a mile of slickrock, the route passes onto the red Carmel and becomes a dirt path, one can breathe a sigh of relief. The trail leads down to the Halls Creek Drainage Trail and a short return back to the trailhead.

Gambel Oak is native to much of the Rocky Mountains and Colorado Plateau and is able to thrive in diverse conditions. Although not truly common in Capitol Reef, it does show in several good clumps in several of the park's southern canyons. Wherever they grow, Gambel oaks are very social, tending to form clumps, or, along drainages, to line the banks.

Near the end of the 19th Century, the canyon served as a wagon route for Mormon pioneers to San Juan County. The unusual name was derived from account that the narrows were narrow enough to "twist a mule."

Later, when cattle were routinely herded through Lower Muley Twist, Cowboy Cave was a popular spot, and there are many signatures from the early 1920s on the walls. 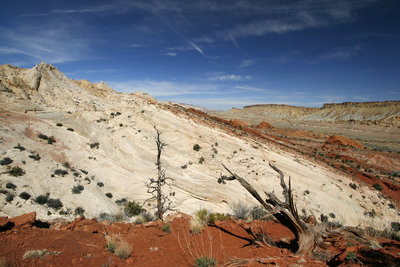 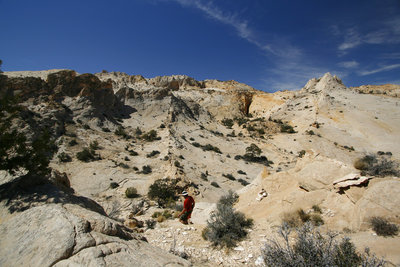 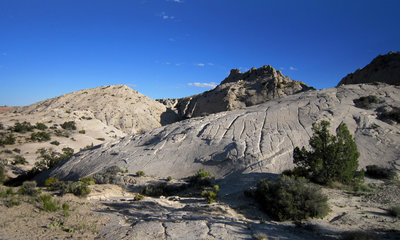 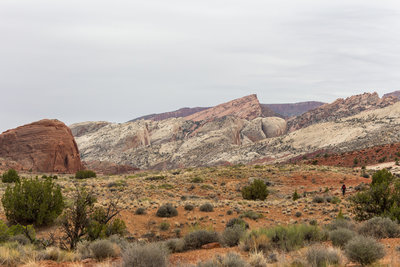 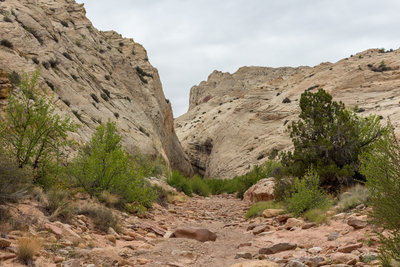