“A hilly trail in a forest setting with waterfalls at each end. ”

Family Friendly The park offers lots of activities for families with children of all ages. This trail would be very difficult for a child under about 10.

The park is open all year with cross country skiing and other winter activities. The shower and restroom facilities at the campgrounds are shut down from mid-October until mid-April, but camping is allowed.

There are exposed tree roots, and damp weather can make the roots and some of the clay portions of the trail a bit slippery. Carry bug spray during the warmer months.

The Michigan DNR lists the trail as 4 miles long. However, at both ends of the trail the waterfalls are not seen. The hike I have mapped (5.6 miles) starts at what is called the Brink of the Upper Falls which is a wooden observation platform at the top of the fall (96 steps). From there, head downriver and enjoy other observation points, including a set of 116 steps leading to a platform a little above the river allowing a view of the Upper Fall through the gorge.

Once back at the top of the steps, the DNR's official trailhead takes you into a forest of maple, beech, and various evergreen trees. It's a hilly trail that initially takes you away from the river into the forest and winds back and forth to and away from the river. We set out on this trail on October 18, 2016. Michigan's Upper Peninsula is known for its mosquitoes in the summer time. On our outing, we did not see any. The fall colors were at their grandest at this time of year. It did rain for several days off and on before we headed out, so the trail was wet with some slippery and some mucky/muddy areas.

The trail can be traveled in both directions and can be taken as one way or out and back. To complete the trail one way, a shuttle service is provided during the summer months, or if traveling with friends, you can take a vehicle to your start point and once the trail is completed, go back with the friend's vehicle and get the other. There is a great parking lot at the Upper Fall along with Camp 33, a restaurant and brewery, and there is, of course, a gift shop.

The Lower Falls are numerous and are split by an island. The island is accessible during the summer season by renting a rowboat for a short row out to the island dock. Once on the island, there are boardwalks and trails that allow you to get close up to the falls and in the water when temperatures allow.

This is a trail you'll never forget. It's one of Michigan's gems.

Maple and beech trees provide the fall color along with contrast for various species of pine and hemlock. Animals are plentiful in the area, but not always seen.

The location of Camp 33 near the Upper Falls was the site of a lumber camp years ago. The camp property was eventually purchased by a couple that had often hiked or canoed in to see the falls. Their dream was to someday see a road providing access for the public to be able to easily see these beautiful falls. That dream was eventually realized, and the DNR has done a wonderful job of making Tahquamenon Falls a first class state park. 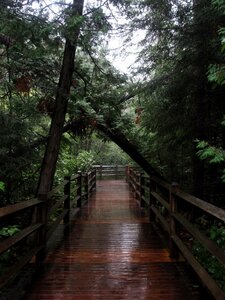 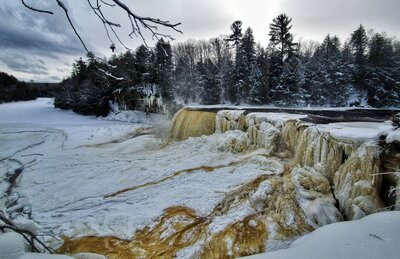 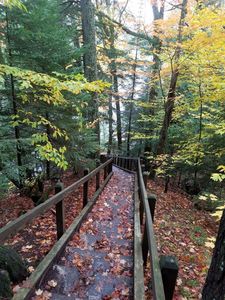 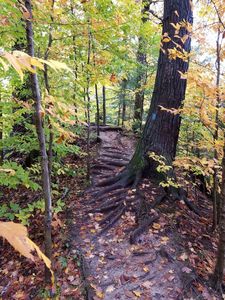 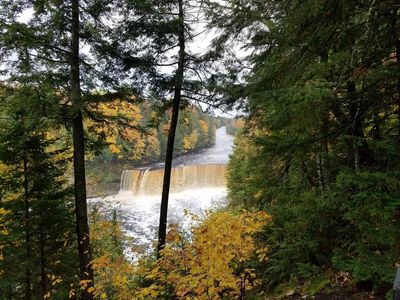 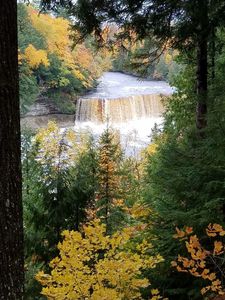