“A strenuous hike that travels down one of the park's longest inner-canyon routes. ”

Like all of the inner-canyon routes, the Warner Route is steep, strenuous, and unmaintained. Because of its longer length and rough terrain, the NPS recommends that hikers plan on making this an overnight trip at one of the five campsites at the bottom.

If you're not put off by the promise of scrambling down this steep ravine, get a Wilderness Use Permit from the Ranger Station and then make your way along the well-worn Warner Point Nature Trail. Before reaching the overlook, there's a small "Serviceberry Bush" sign on the left. This is the start of the Warner Route and your gateway to the canyon below.

The first half mile is the clearest and easiest to navigate. The descent starts as moderate and then tips the scale to steep as hikers head past the first craggy drainage to a saddle further west. Just afterward, there's a short climb to a nice rock outcropping before the trail begins to descend.

Make no mistake, from here to the canyon bottom far below is very steep. And the unreliable tread made of gravel, rocks, and boulders only adds to the difficulty. The route down is faint, but usually clear enough to not be a nuisance. But, do make sure to pause regularly and study the landscape behind you, as things are substantially less clear on the return, and the alternatives to the main route are sketchy.

The end of this drainage-scramble beckons with a surging river, pit-toilet, and the previously mentioned campsites. While by no means large, the riverbank is generous (by canyon standards), and it's worth poking around and exploring.

On the return, follow the same route back. Now and again take a moment to study the route ahead and make sure you stay on track. Once you've reached the saddle, there's still some hiking to do, but the hardest part is well behind.

The waters of the Gunnison River are especially fine for fishing. A valid Colorado fishing license is required, and there are specific regulations to fishing in the area. Find out more by visiting the NPS's fishing page here. 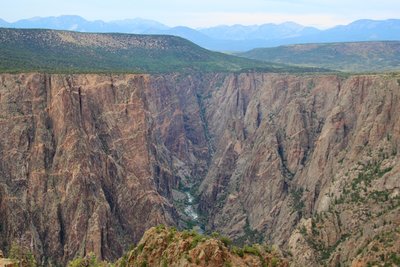 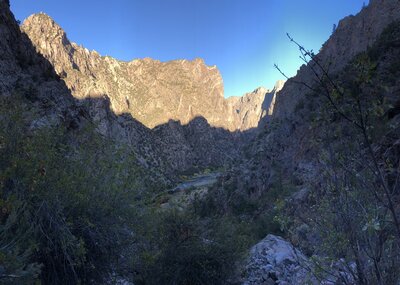 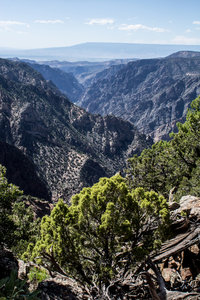 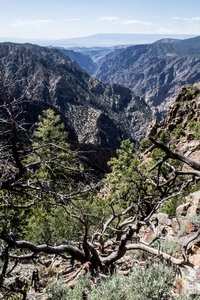