“A lovely day hike that hits many of Stone Mountain's best features! ”

Longer than the Walk-Up Trail, but much more level and shaded, this hike takes you all the way around the bottom of Stone Mountain. Along the way, you'll skirt the side of the rock face itself as well as catch more wide-angle views of the mountain through the trees and across the water.

The trail passes right next to a historic mill and a covered bridge, and takes you right along the lake with beautiful views over the water in the last couple of miles. Expect rolling but mostly gentle elevation through woods and over exposed rock faces at times.

Get a park map on your way in if you don’t have a recent one on hand. There are attendants at both main entrance gates who will have them. Alternatively, download the free Hiking Project mobile app to help navigate in real time.

While driving in the park, keep in mind that about half of the inner circle of roads (Robert E. Lee Blvd) are one-way. If you find yourself on this and miss a turn, you must continue all the way around again.

If you think you'll visit the park more than three times in a year, get an annual parking pass for $40 at the entrance gate. It is a (non-transferable) sticker that goes on your car. Otherwise, a day pass is $15 dollars.

Be careful on the exposed rock faces, especially if it has rained recently, as they can be very slippery. Note that some of the blazes in the open areas of the mountain are on the rock face itself.

Bonus: If you are a paddler, this is a great spot for some flat water fun well within reach of metro Atlanta!

Begin at the trailhead across the road and just past the playground, and follow the white blazes as you descend into the woods. This first section through the forest is mostly flat and crosses a few creeks and stony areas. At the first intersection, follow the orange Connector Trail arrow to the Nature Garden Trail (green). This takes a short section of the Garden Trail on its eastern side to rejoin the Connector Trail.

At the next signpost, follow the orange arrow to get back on the Connector Trail. The trail will then turn left in front of some railroad tracks, then take a right to cross over them. Continue to follow the orange blazes as they take you on a diagonal elevation climb onto the rock face of the mountain. There are only small trees and shrubs here in patches of vegetation, and you get a clear view up the side of the mountain.

At about one mile, you'll intersect the bottom of the Walk-Up Trail. There will be railroad tracks on your left, as well as a restroom building and the Confederate Hall parking lot. Continue following the orange blazes near the railroad tracks on a sidewalk-like surface until you reach a ramp with metal rails (as of Jan 2017 there are pine trees across this ramp and it dead ends at the top). Stay to the right of the ramp to follow the orange blazes on the trees and the rock face.

The terrain will continue through some woods and then again over rock face. When in doubt of where the actual trail is on the rock, go straight until you can see an orange blaze on a tree ahead. You'll soon be back in a forested area with a dirt trail under foot.

The Connector Trail will continue for about another half mile of mostly level terrain before ending and merging back onto the Cherokee Trail at about the 1.5-mile mark (just stay straight at the signpost). This section is also reasonably flat and offers some lovely views of the side of the mountain through the trees, especially in the winter. In another half a mile, the trail crosses a park area used for viewing the laser show and other events. Follow the sidewalk out into this open area as it takes you next to a pond just below the massive carving on the north side of the mountain (see history section). Enter the wooded trail again on the other side and keep following white blazes.

You'll soon cross over some railroad tracks and a road. The trail here follows along a system of walled water channels that lead up to Grist Mill. Follow the path across a wooden structure that hugs the mill itself. This is a great spot for pictures, picnics, and sightseeing, with water running over rocky shoals as it makes its way into the lake. There is also a bathroom on the other side of the mill at the top of a flight of stairs just before the trail picks back up again.

For the next mile, the trail hugs the lake. Shortly after the Mill, you'll cross a narrow rock ledge almost at water level next to the road, then pass by (but do not cross) the wooden covered bridge. Just after that, there is a short scramble across a rock face that slopes all the way down to the water. If you stay closer to the top of this area, it is more level. About a mile later, you'll take a left to stay on the Cherokee Trail, crossing a land bridge between the large Stone Mountain Lake (to the left) and the smaller Venable Lake (to the right). At the end of this, you'll cross a small wooden footbridge over a creek that spills into the main lake over some rocks.

This section rolls up and down a quite a bit more, and takes you a bit further from the water (of Venable Lake). There are some nice views here through the trees and over the water to the mountain (you'll now be looking at its south side). Stay straight on the Cherokee Trail at the next intersection and cross over a road (Stonewall Jackson Drive). The trail will bend right, cross a bridge, and will soon end at Robert E. Lee Blvd. Take a left here to come back to the playground where you started.

Turtles and blue heron are common to see at the lake water's edge, along with the usual forest suspects (squirrels, chipmunks, the occasional deer, etc.). The rare Confederate Yellow Daisy grows in the fall and can be seen growing in crevices and the woods.

Stone Mountain Park is rich with history, much more than can be summed up here, but some highlights you'll see on the trail include:
- The largest bas-relief carving in the world is on the north side of the mountain, featuring Stonewall Jackson, Robert E. Lee, and Jefferson Davis on their horses (Lil' Sorrell, Traveler, and Blackjack, respectively).
- Grist Mill was around 100 years old when it was moved from its original home near Ellijay, GA to the park in 1965.
- The cedar and pine covered bridge that leads over to Indian Island on the lake was moved from Athens, GA in 1969 (and it is also over 100 years old). 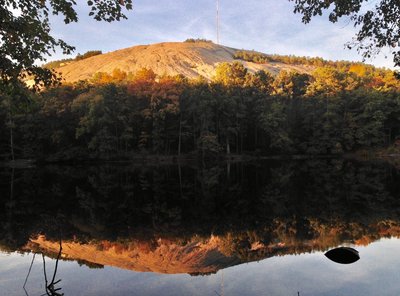 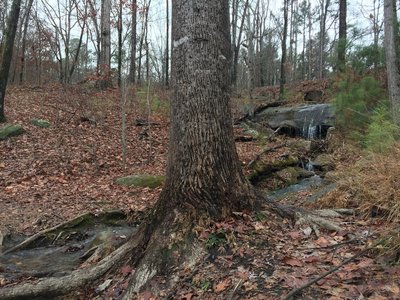 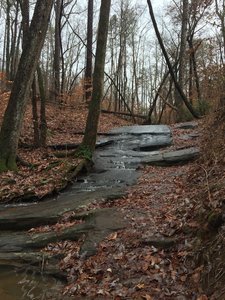 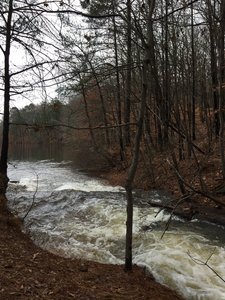 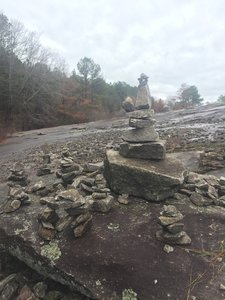 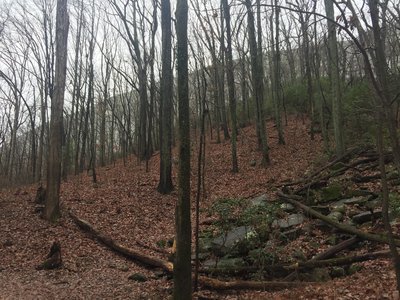