“Some paths on the island are narrow, steep, and potentially slippery when wet, while others are rocky and arid. ”

It is illegal to enter or litter in any part of the spring, including and above the waterfall. Entrance to the cave is by permit only, and unlikely to be granted due to dangerous conditions inside and the risk of white nose syndrome on bats.

The Island Trail begins at a bridge connection to the Spring Trail (at about 37.974176, -92.771760). The bridge is actually the remains of a mill that once used the spring for power. The "island" was formed when cave passages around it collapsed to become the Spring Canyon.

From the bridge, the trail climbs steeply up the island, on mostly natural terrain, with timbers for erosion control. From there, the trail becomes a labyrinth of branching footpaths, exploring the limits of the island. Diligent explorers may find the "balanced rock," a limestone boulder that, when seen from the correct angle, has an eroded layer almost entirely under it.

The north side if the island descends to the remains of a dam used to form the spring pool, which then provided enough of an elevation drop to power the mill. Spring water now cascades down the boulders like a waterfall. Despite the small size of the island, it contains a cave with an entrance that is likely to go unnoticed, if not for the "do not enter" sign. Some paths on the island are narrow, steep, and potentially slippery when wet, while others are rocky and arid as they pass through glades.

After exploring the island, the only option is to return to the bridge. 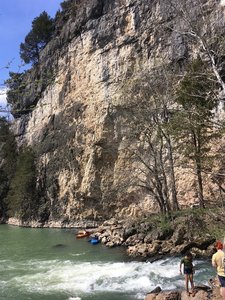 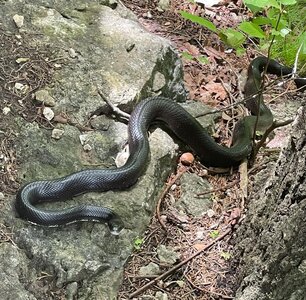 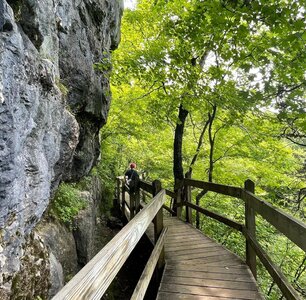 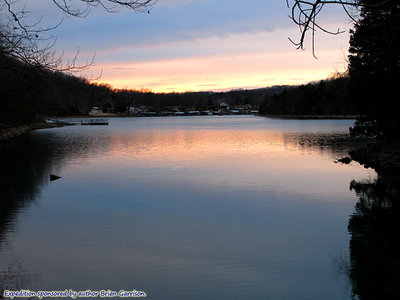