“A lung-stretching hike on a classic trail over Cascade Mountain to the base of the Manitou Reservoir dam. ”

The trail is open year-round, but Manitou Reservoir is part of the Manitou Springs Watershed and is off-limits. Don’t expect to be able to continue up to the lake for shoreline photos.

This out and back climbs uncompromisingly along the northeast ridge of Cascade Mountain, over its summit, and back down a few hundred feet to Trail #713 at North Fork French Creek and points beyond. Your effort rewards you with excellent views of the historic Ute Pass, Pikes Peak, and the canyons below. Take some time to explore around the summit area for excellent photographic opportunities and boulder climbing.

There is NO PARKING at the trailhead or on Anemone Hill Rd. The closest parking is on Emporia Street or at the corner of Park and Anemone. From Emporia Street, hike up Park Street to Anemone Rd (less than 5 minute hike). This adds about a half mile (round-trip) to the outing.

For this route, I parked in a small lot on Emporia Street near Park Street, about a quarter of a mile from the trailhead. Distance references are taken from there.

The Heizer Trail begins climbing immediately at the signed trailhead and hardly relents until it reaches the top of Cascade Mountain, 2 miles and 1,900 vertical feet later. About 50 feet after you pass the Heizer Trail sign on a tree, you'll veer left and switchback sharply to the right. Get used to this because it will be the first of about 15 or so switchbacks on the way to the summit of Cascade Mountain.

The first mile passes under a pleasant canopy of spruce and pine with excellent tread and plenty of shade that will be welcome on hot summer days. At about a mile, the canopy opens up to a southeastern exposure through a grove of Gambol Oak, affording views of the town of Cascade that you just ascended from and canyons of Ute Pass, through which Highway 24 passes on its way to the summit in Divide, CO. Catch your breath and take in some water because this point also marks the beginning of the steepest part of the ascent. Whereas up to this point, you ascended at an average grade of 8-20 percent, the grade suddenly ratchets up to 23-40 percent for the next 0.7 miles.

Continuing on, the tread in this area is replete with crushed Pikes Peak granite, marble-to-walnut sized and fairly deep in places, making the ascent more challenging for a few hundred yards until you re-enter the spruce/pine canopy. On the flip side, this tread makes a pretty good arresting medium when descending. The end of this steep 0.7-mile stretch is marked by a rocky overlook on your right with breathtaking views of a thousand-foot-deep canyon with Cascade Creek at the bottom. Take a break, snap some photos, and catch your breath again because you’re not quite done climbing.

At this point you’ve climbed about 1600 feet in 1.7 miles and are just over a quarter of a mile from the summit of Cascade Mountain. You’ll know you have finally arrived at the 9,387-foot summit when you round a bend to the left, and the trail finally levels off at an open area with the summit boulders on both sides. If you are a peak-bagger, congratulations—you just bagged “Cascade Mountain,” a “soft-ranked” 9er according to Lists of John.

For many people, this will probably be the turnaround point, and a very satisfying one at that. After exploring the summit area, though, I chose to continue on the Heizer Trail down the other side to its endpoint at Forest Service Trail 703. As the trail begins its descent on the south side of the mountain, you’ll notice that some trees are marked with orange blazes (vertical stripes), apparently to mark the path in an area where the trail was once less defined or is prone to the development of social trails.

From the summit, the trail continues about a mile, descending about 500 feet to a T-junction at the aforementioned FS Trail 703 at North Fork French Creek. Left (east) at the Trail 703 junction will take you along the creek into the Hurricane Canyon Natural Area and eventually to the Barr Trail just above the top of the Manitou Incline. Right (west) at the Trail 703 junction will take you to the trail’s western endpoint below the base of the Manitou Reservoir dam, about a quarter of a mile from the Heizer junction. From here, Forest Service Trail 638 begins on the other side of the creek over a wooden log bridge and eventually makes its way to the Barr Trail about a mile and a half below Barr Camp. On this early March day, though, I saw no footprints in the deep snow on Trail 638 across the bridge, and, not wanting to post-hole, I decided to make this my turnaround point.

Coniferous forest with occasional spots of Gambol Oak on the ascent from town. The trees were a bit thinner on the south side of Cascade Mountain as expected. Wild turkeys, mule deer, mountain lions, and black bears are known to roam the area.

Ute Pass was once a migratory route for bison that wintered in the eastern plains and migrated to South Park in the summer. Later, native Utes used the pass as a trade route between Santa Fe and South Park. According to the Ute Pass Historical Society, the Ute trail became a wagon road that ran from present-day Rainbow Falls to Leadville in the 1860s and continued to be used by stagecoaches and equestrian traffic until the 1930s. Ute Pass was also a thruway route for the Colorado Midland Railway, whose locomotives served mines and towns between Colorado Springs and Grand Junction from 1883 to 1918. In 1932, a new road that eventually became US Highway 24 was built to accommodate increasing automobile usage.

While pausing to catch your breath on the way up Heizer Trail, look down at Ute Pass and imagine it as it once was. Instead of a 4-lane highway, picture herds of bison, oxen teams, stagecoaches, and the occasional locomotive making their way through the pass. 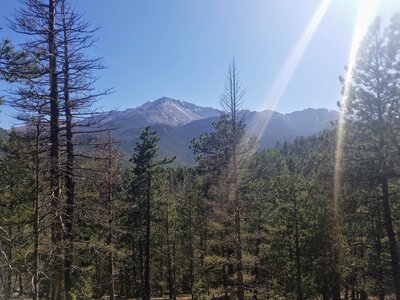 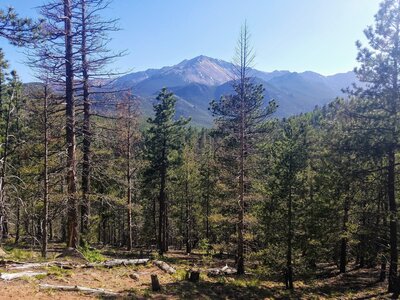 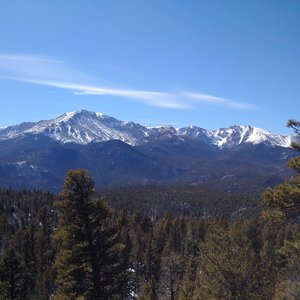 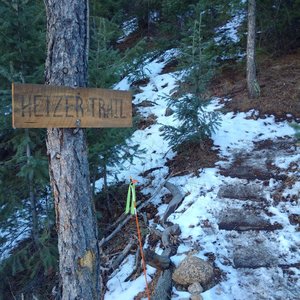 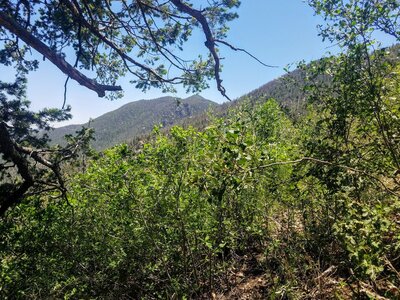 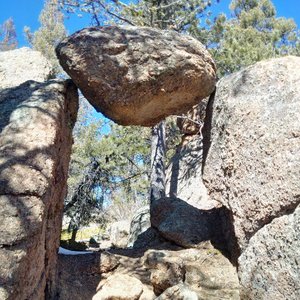 Garden of the Gods Loop

Section 16 to Jones Park (and back) Mountain Ramble