“Head through history as you look back to the early 20th century in these amazing cement bunker ruins. ”

Foot-traffic only, though bikers still ride on or near the trails.

Starting at the North Beach trailhead, the sights start immediately. Open views of the Strait of Juan de Fuca as you walk across an open plain next to the Chinese Gardens lake. After a fifth of a mile, you're in the trees and bunkers.

As you hike up to the top of the bluff on the Searchlight Road Trail, you'll see Point Wilson through the trees, and many spectacular views of the Olympic Mountain Range and the Cascades Mountain Range.

Arrive at Memory Vault after seeing battery installments and hidden pop-up artillery nests, where art and poetry meet history and nature. There are temporary signs up all over this hike with historical information from the Fort Worden historical society, describing what each bunker was used for.

On your way back down the trail, stop by any you missed! Be sure to explore IN the bunkers, too! These are open to the public, but be aware that kids sometimes like to try to spook people in there.

The Bluff Trail had some muddy spots when I went in April, but they were easy to navigate. The 300ft or so of elevation change occurs fairly quickly, there is a lot of flat trail to walk on especially while enjoying the bunker installments. Also be sure to find the informational signs for each bunker as it will describe the historical relevance thanks to the Fort Worden historical society.

Parking and Trailhead Parking
The parking lot and trailhead are located in Port Townsend, in the community of North Beach. The park and this parking lot represent the northeastern most tip of the western peninsula. Parking gets full on nice days, but sometimes you can find parking in the neighborhood nearby if you are respectful.

Trailhead and Name
The trailhead is on the eastern side of the parking lot. The North Beach Trail is the first segment and goes through the open field with views to the Chinese Gardens lake and out to the Strait of Juan de Fuca. Near the end of the open field, you'll arrive at thickening underbrush and forest, until you are in the forest proper, and the park. The trail splits here, you'll want to go to the left.

Other Recreation
This field gets lots of wind, so it's an ideal spot to play with wind based toys, like kites and gliders of all sorts. On my hike last weekend, there were model planes being tossed and flown, and parachutes being aired out and lifted. Super cool!

Historical Route Battery Walker
The first bunker on the hike is called Battery Walker. It is to the left as you hike up Searchlight Road (the trail/road). The first of the fantastic views is available here! At the wooden fence, you can see Lopez Island off in the distance, and on clear days, you can see some of the Cascades range to your front right.

Battery Tolles
One of my favorite installments is Battery Tolles. This bunker has four rising artillery gun nests (guns no longer on site) spaced out and hidden behind a large grass berm. Great views from the field in front of the mountains. This is the sophomore view of what you saw at Battery Walker! This bunker installment is great to explore!

Bluff Trail
After you've gotten your fill of Battery Tolles, continue eastward on Tolles Road (the trail) until you get to some steps or a small hill with a trail leading over it. This will take you to the Bluff Trail, where you'll get the Senior and most spectacular view, in my opinion. I usually don't take photos of this one because it's better to keep it for yourself! This trail leads a wide curve away from the next bunker installment, but we'll get to that in a moment. For now, glance through the trees wherever you can see to get the highest elevation views in the park. You'll be able to see down onto the Fort Worden beach, Point Wilson at the very northeast tip of the peninsula, and the lighthouse that operates there.

Memory's Vault
As you come out of the Bluff Trail, you'll see a cement square sitting on the ground that say's "Memory's Vault". This is a poetry and art installment that is best viewed in person. There are cement sculptures, benches, a rock garden, and some other meaningful pieces of art here that are better consumed with your eyes than through text! After you've finished enjoying the art installment, there is a trail that continues at the west end of the Vault installment called Vault Loop Trail, take this back to the road and head east again to return to Gun Line Rd and the bunkers there.

Gun Line
As you return to the west from Memory's Vault, you'll find Upper Gun Line Rd, and Gun Line Rd. I recommend going through Gun Line Rd as it goes between the battery installments here, but the roads are 20ft apart, so take your pick. There are four batteries that make up this area that are all joined together. These bunkers are the best to explore inside of in my opinion out of what is available on the bluffs.

The Return Route
From here, you can retrace your steps back through the Bluff Trail and through the previous batteries back to North Beach trail and trailhead.

Typical Washington fare. I found one tree that may be old growth, the rest are on their way to old growth, but not there yet.

Fort Worden, the state park in which this featured hike takes place, was once used as one point in the triangle that protected the entryway to the Puget Sound. The other Forts that make up the triangle are Fort Casey and Fort Flagler, which are also both fun to check out!

You'll find early 20th century-era cement military bunkers that were active for a time, but never fired a shot in hostility. There is a lower section to the park as well that has campgrounds and more bunkers. In addition, there are historical houses and offices from when the park was militarily active. Some claim these to be haunted, though I've stayed in one of the Officer's Houses and did not experience anything out of the ordinary. 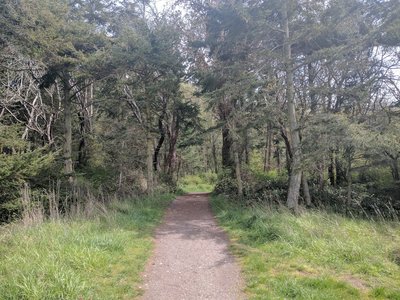 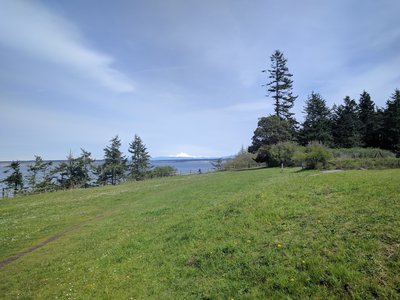 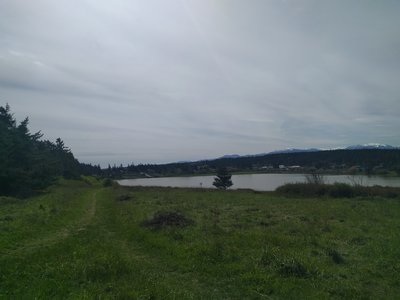 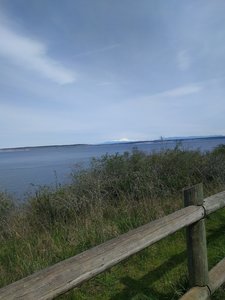 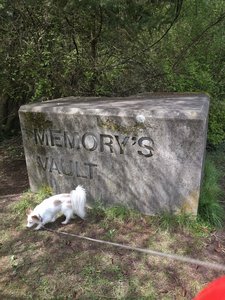 All Clear 11 days ago See History