“A belt of open space slips through development, providing a lovely escape. ”

Development is encroaching upon this area, but this loop does a good job slipping around most of it, allowing one to envision a time when the area was truly wild.

This loop is often done on a mountain bike and by that means it is a short enough, though still challenging, journey to do year round. But the reasonable hiking season is limited from roughly February to the end of April during which time it is a 3-star route. The rest of the year this loop is too hot and dry and/or brown turning gray to tolerate for 10 miles. (Even in late April it was getting hot enough that I obtained the GPS track riding a touring bike, which with its wider more durable tires is manageable, though not as joyous as a mountain bike on which one could safely fly down the steep pitches.)

The trail is reasonably well marked but most signs just say "Trail" rather than "Lusardi Loop" or similar. Some spots are less clear but taking the sensible or more traveled route invariably proves to be the correct choice.

Begin following doubletrack, on what seems to a park maintenance road. At 0.70 miles at a high voltage power pole, turn slightly right, following the trail sign for Lusardi Loop. At 2.0 miles, turn left, staying south of the Lusardi Creek and then pass under Camino Del Sur at 2.2 miles. From here the standard route is take the singletrack north of the creek for 0.3 miles and then cross back to the south side over a small wooden bridge. Alternatively, you can ascend the steep paved path from under the bridge about 40% of the way to Camino Del Sur before turning right back on to the doubletrack. In either case, beyond the wooden bridge, continue another 1.7 miles, largely isolated from development, until you reach San Dieguito Rd after a final climb.

Cross this road to catch the trail on the other side ~20 yards up the road. Take the singletrack, paralleling the road, downhill to a clump of trees. Follow the power line south for 0.8 miles, through steep pitches. At the fence, head east 0.2 miles before turning south again for another 0.8 miles through the Fairbanks Summit neighborhood. When you reach a concrete area, turn right to continue through a peaceful valley for 0.6 miles, climbing up to quiet Caminito Lazanja. Do not cross busy Camino Del Sur which runs parallel to Caminito Lazanja. Instead follow Caminito Lazanja downhill about 0.1 miles and turn right to pass under Camino Del Sur.

Stay on the trail alongside Caminito Pass for 0.2 miles and then return to doubletrack shortly before Caminito Pass meets Caminito Santaluz Sur. Enjoy 1.1 miles of nice views with Black Mountain prominent in the distance, easily identified by the radio towers. At the unmarked trail junction near the bridge do not cross under Carmel Valley Rd. Instead turn left to mostly parallel Carmel Valley Rd for 0.5 miles, eventually ascending a steep stretch that puts you at the edge of Carmel Valley Rd 9 miles into the loop. Break away from Carmel Valley Rd to finish the loop in another 0.8 miles.

Note: Google Maps shows a slightly different route at the beginning of the loop, a bit east and north of the route I show here, merging back with the route I show, at the 2.0 mile mark. I think Google is wrong because the route here follows the route on the Black Mountain Trail Map provided by the land manager. The Land Manager route does a better job of keep you at a distance from the encroaching development, though at the cost of more up and down. 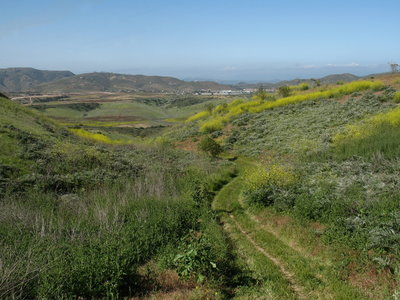 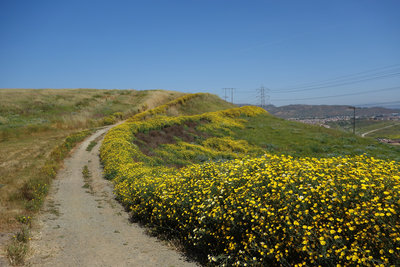 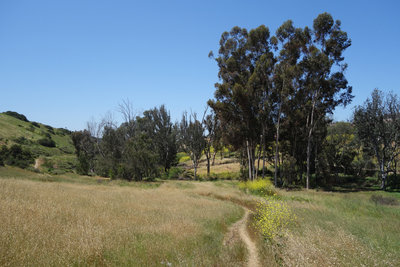 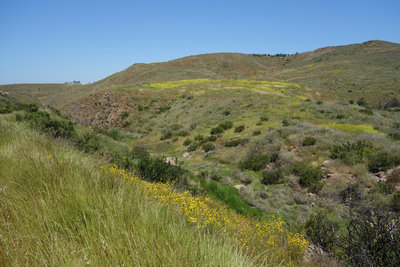 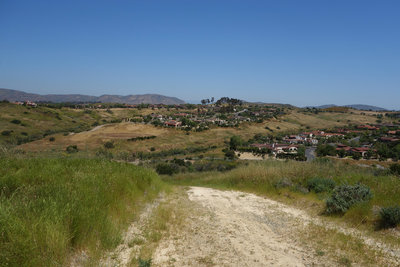 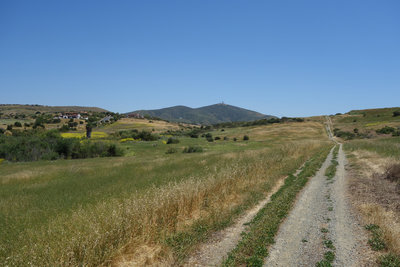