Sutton Mine Trail to the Neosho Mine

“For a mining venture that never paid off, the trail up to the Neosho Mine now boasts a great hike. ”

Family Friendly It's steep, but I've seen kids at the overlook. With enough time and incentive, you could probably get them all the way to the mine.

Respect the area's history by not vandalizing or otherwise damaging the mining ruins. Entering any open mines is not permitted for health and safety reasons.

Logging in at just 4.4 miles roundtrip, and with only a thousand feet of elevation gain, the Sutton Mine Trail to the Neosho Mine is one of the shortest hiking options Ouray has to offer. But it’s one of the town's best.

Visible from Highway 550, the mine, bunkhouse, and the blacksmith shop (still with its 9-5:30 sign) look like a quaint timestamp of prosperous times. But in reality, the mining venture never paid off, and all it ever saw was loneliness and tragedy.

The first half mile of the trail parallels the highway, gaining most of its elevation in the slow summit of a 9,000-foot shelf perched high in the cliffs above the Uncompahgre River. While groves of pine and aspen keep the gradual views in check much of the way, the shelf opens at the Ouray Overlook to reveal 2 miles of commanding views into Ouray’s narrow river valley, the Amphitheater, and Abrams Mountain. Despite the fact that the highway sits less than a quarter mile away, the high altitude provides a good buffer against most traffic noise.

While many visitors turn back at the overlook, another easy half mile of hiking along the bench is waiting for those willing to push on. Circling west along a rocky outcrop, the trail marches slowly toward Abrams Mountain before ducking into a dense pocket of spruce and fir fed by a series of flowing gullies. Losing about fifty feet to accommodate the wider channel of Ralston Creek, the route soon comes to another overlook, this time of Bear Creek Falls and the gorge. Look far below you toward the deep gorge of the Uncompahgre River, and you can spot the first remains of the mines near Neosho Mill.

A little more than one-tenth of a mile beyond this point, the trail meets with the tram cables overhead, an outhouse, an ore car on the tracks, the antiques shop, and finally, the old bunkhouse and office. Despite the misnomer, the trail ends here and never actually reaches the Sutton Mine, which rests higher up on the mountainside.

The trail passes through heavy groves of aspen and pine all year, as well as wildflowers in the summer. Deer, mountain goat and bighorn sightings, and the occasional mountain lion or bear can be experienced on any of the Ouray area trails.

Back when Highway 550 was merely a dirt road, Margaret and Edward Weatherly bought this mine in hopes of striking it rich in the gold rush. But for such high hopes, the venture never payed off. To make matters worse, the Weatherly home, which stood higher up on the mountainside behind the boardinghouse, was tragically flattened by an avalanche. Margaret died in a state mental hospital soon after Edward's death.

The song "Danny Boy" comes from Edward's brother. Margaret put the tune to his poem, though she never received credit. 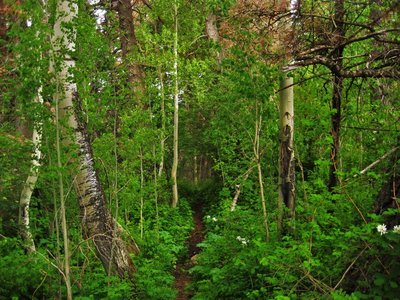 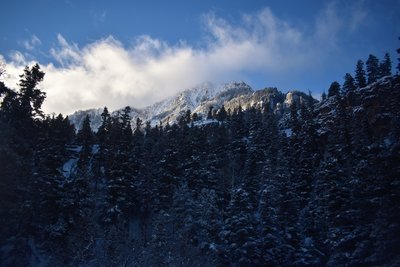 Weehawken Trail #206 to Alpine Mine and Overlook