“Hike up a slot canyon with several water crossings to discover the abandoned Cooney mine site. ”

Family Friendly The trail rarely strays far from Mineral Creek, and there are a lot of rocks to climb and old artifacts to see.

This trail is packed with beautiful views of the canyon walls and their layers of color, healthy trees (pretty in any season), small waterfalls, and signs of wildlife. The most interesting part of the hike, though, is man-made: remnants of buildings and equipment used when Cooney's mining camp was in full operation.

Remember to bring appropriate shoes for multiple water crossings.
Check the weather; do not go if there is there is the possibility of a flash flood, as the canyon would become a very dangerous place.

This trailhead is located several miles east of US-180 at the end of Mineral Creek Road, which is just south of the Alma store. Mineral Creek Rd goes through private land, but takes you past the tomb of Sgt. James Cooney, who discovered a vein of minerals in the area and started a mine further up the creek before dying in the Alma Massacre of 1880.

From the trailhead, it only takes a little over a quarter of a mile to get to the first water crossing. Mineral Creek can be rather deep and cold in early spring, but otherwise is shallow enough that the many water crossings pose little problem other than getting your feet and ankles wet. A few of the crossings can be done on large rocks and logs, but not all. Cairns mark the trail most of the way, but it is difficult to get lost, as the trail never goes far from the creek and goes right through a slot canyon.

As you hike, you can notice many signs of the mining camp, including a sealed mine entrance, an old rusted-out safe, iron bars from a road that used to lead to the camp and many other rusted metal scraps. Don't forget to look up and around at the spectacular views of towering rock walls, little waterfalls, and large, gnarly trees. One popular rock formation to notice is the eye and needle, which you can see right after the first water crossing.

At about a mile-and-a-quarter in, the banks on both sides of the creek disappear for several yards, leaving no choice but to wade upstream for a bit. Not too far after this, the canyon opens up a little. Then the trail leads right past the remnants of the first little building; there is evidence of a few buildings on each side of the creek as you go further. The portion of the trail marked here ends where there is a split in the trail. The right fork leads a little ways towards the creek to a site with some old metal equipment reminiscent of a smoker and a couple of benches; Mineral Creek Trail continues several more miles.

Sgt. James Cooney was in the area in the army when he discovered a vein of precious metals. He kept quiet about it until he was no longer serving, at which point he opened and began operating a mine. By 1880, the mine had become a very profitable producer of silver ore.

Three years earlier, Chiricahua Apache Chief Victorio and a band of followers had escaped their reservation in Arizona and returned to the area with the desire to be allowed to live there. Getting no response from communications with the US Government, Victorio and his men attacked Cooney's​ mining camp and the nearby town of Alma in what became known as the Alma Massacre. Many of the residents survived, though Sgt. Cooney was one of the casualties. His mine continued in operation until the discovery of larger veins meant the mining operations largely moved to Mogollon.

The Library of Congress has a record of Agnes Meader Snyder's firsthand account of this battle, which is great background reading for this hike. 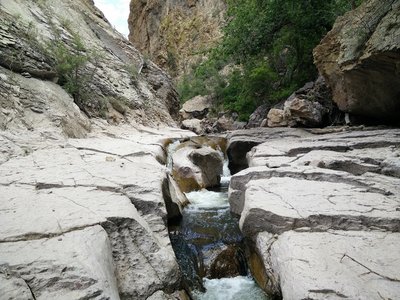 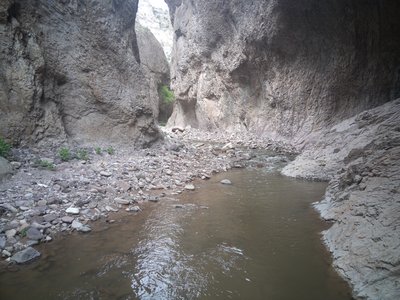 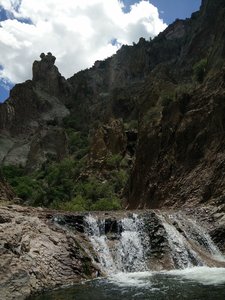 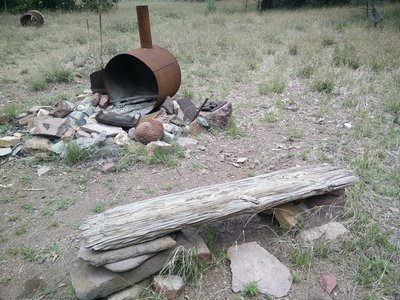