“Hike atop coastal bluffs in this preserved open space. ”

Off-leash dog use is only allowed in the Douglas Family Preserve in select areas. Dogs must be leashed when outside of these areas.

Enjoy this open space above Arroyo Burro Beach that makes for a great place to take your dog and experience the bluff-top views.

From the Arroyo Burro Beach parking lot, off of Cliff Drive, follow Oak Grove Trail along the north side of the Arroyo Burro Estuary. Then, cross over Mesa Creek on a bridge before briefly climbing up to the top of the bluff. Once you're at the top of the bluffs, stay to the right and follow the wide, dirt Douglas Family Preserve Trail as it bends to the west and then as it moves down coast over the sea-side cliffs. This length of the hike along the cliffs offers amazing coastal views.

You'll eventually reach the end of the path as it hits Medcliff Road on the short Douglas Spur Trail. However, from here you can turn around and re-trace your steps briefly until you reach the 3rd diverging path, at which point you can bear right and follow a different path northward alongside the neighboring houses. Eventually, the path will bend to the left and you'll soon come across the original path just above the bridge over Mesa Creek. Turn right here to cross over Mesa Creek before turning left to return to the Arroyo Burro Beach parking lot, at which point this looped hike comes to an end.

Many exotic plants can be found throughout the Douglas Family preserve that were left behind by the old nursery that was once present on the land.

In 1949, a man named Roy Wilcox developed this land into a large nursery, housing a variety of plants. The nursesry would close in 1972 and remained undeveloped until 1996 when members of the Santa Barbara community raised enough money to purchase the land and preserve it. The newly created park was named after the actor Michael Douglas, who made a significant donation to help preserve the land. 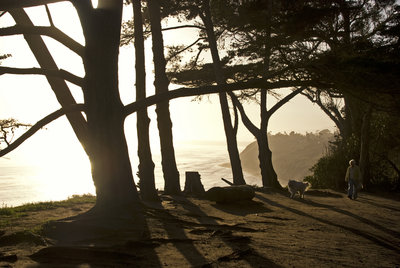