“A four-mile hike through Hondo Canyon in the heart of the Santa Monica Mountains. ”

Utilizing the Backbone Trail, the Hondo Canyon point-to-point hike takes you through one of the most dramatic and scenic canyons in the Santa Monica Mountains.

Note this hike is mapped as a point-to-point or shuttle. The out-and-back option would double the listed distance to over eight miles roundtrip.

Start this hike at the yellow fire gate that lies just to the north of Stunt Rd. After hiking for roughly 100 yards past the gate, you'll find a dirt path that diverges to the right. Take this path, the Backbone Trail, along Fossil Ridge, known for its abundance of clam fossils. After hiking along the ridge for 6/10 of a mile the path will start to take you down into Hondo Canyon.

Once in the canyon, you'll pass a stream and waterfall that flow during rainy seasons. You'll then briefly ascend on the path as it runs along the south canyon wall before descending further into the canyon. Along this descent, you'll catch a glimpse of some the damage done by the 1994 earthquake that rocked the area; shattered trees and displaced boulders lay near the canyon's mouth.

Continuing along the path, you'll soon cross Topanga Meadows, which can become pretty muddy after periods of heavy rain. After crossing Topanga Meadows, you'll cross the creek and continue to the end of the Hondo Canyon hike as the trail comes across Old Topanga Road.

Tree poppy, bush lupine, and mariposa lily are present on the hillsides of Hondo Canyon. 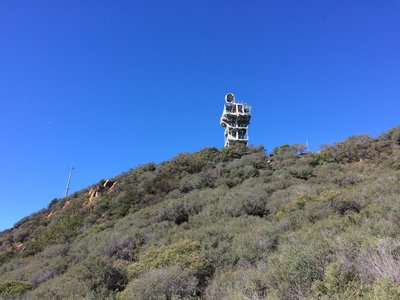 Backbone Trail - The Hub to Will Rogers State Park