“Enjoy a tour of the best places in North Table Mountain Ecological Reserve. ”

Family Friendly Mostly flat or gentle grades - not restricted to staying on the marked trails, which can thrill youngsters.

Sturdy closed-toe footwear and water bottles are advised when visiting the area. Water, trash receptacles, and restrooms are not available on site. Removing, collecting or disturbing any natural resources (mineral, plant, animal) is prohibited. Dogs must be on a leash. Cattle grazing on the reserve is used as a management tool to reduce thatch and non-native grass species to benefit native plants. Do not approach the cattle closer than 300 feet.

North Table Mountain Ecological Reserve is on a very large plateau overlooking the city of Oroville with partial views of Lake Oroville. This is the popular spot with the locals for wildflower viewing.

Arrive early - parking area fills up quickly, especially when the wildflowers are in bloom.

Ancient lava flows created the plateau. It's an ecological reserve ( wildlife.ca.gov/Lands/Place…) and seems to be well-known among locals.

"Marked" trails don't really exist in this area – most people wander around the vast plateau. Since it's an ancient lava flow, there are also small canyons/valleys to explore and waterfalls to admire (in the winter and spring).

The GPS track begins and ends at the parking lot. It starts out following a small creek that drops off to a side of the plateau and since it's off to a side, the creek gains volume from additional contributors. In the springtime, the hills on either side of the creek are lined with wildflowers. There aren't any restrictions about staying on a designated trail so although you can wander anywhere to enjoy the wildflowers up close, I hope everyone's still mindful about preserving the flowers and not trampling them - at some places, that's difficult to do because the flowers are just about everywhere!

As the creek continues down from the plateau, it becomes a 25-30 foot waterfall. The path takes you to the bottom of the fall and you'll enter a more park-like setting with larger trees and meadows. While one can continue hiking along the creek (there seemed to be a cleared out singletrack trail), I wanted to get back up to the plateau so I ventured off trail to scramble up the side of the plateau (that's the sharp turn to the north in the GPS track).

After I reached the top of the plateau, I noticed the absence of designated trails - only a few old dirt roads probably from the time the land was privately owned for ranching. A few groves of large trees followed some of the deep crevices formed by the ancient lava flows. Beyond those crevices, single trees stand on their own, rising majestically above the grass and wildflower carpeted plateau (as seen in one of my shared photos).

The ancient lava flows become more visible at the northern end of the GPS track where the crevices morph into gullies and small canyons with taller waterfalls dropping over large caverns carved out from the end of the lava flow (one of my other shared photos - notice you can wander as close to the drop off as you dare!).

By now it was getting late in the afternoon so it was time to head back to the parking lot. Along the way, I noticed distant, snow-covered mountains (Mt. Lassen area? Or Mt. Shasta area?).

Through a combination of staying on one of the old dirt roads, heading towards the small crowds of people still streaming in from the east, and referring to my GPS track, I arrived at the parking lot.

My final discovery as I was approaching the parking lot: I noticed the ground becoming soft, then muddy and finally small puddles forming from water percolating out of the ground. The drop off to the creek was on the other side of those puddles. My return route took me up to the beginning of the creek where I had started my adventure earlier in the day.

It was a wonderful first time look at Table Mountain Ecological Reserve but it won't be my last. If California isn't in a drought and you can make it to Oroville in the spring, this is a place you should try to stop by - it's well worth it.

Cattle are allowed to graze, but please leave them be.

Typical Northern California foothill wildflowers as shown in the photos.

The ancient lava flows collect rain water and channel it into streams and waterfalls.

As in most central California places, the area was once ranch land and cattle continue to graze. 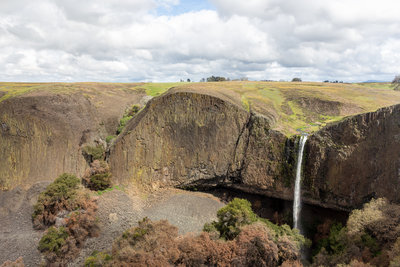 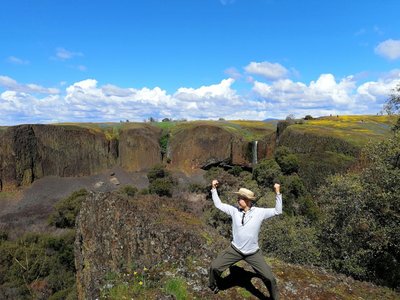 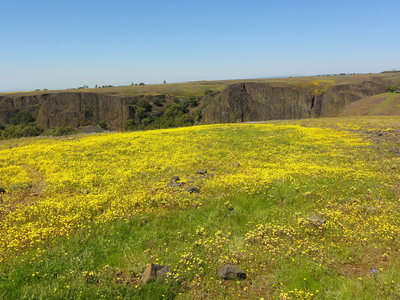 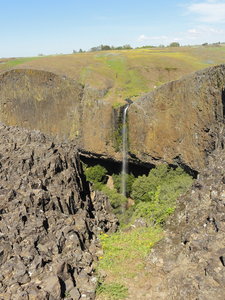 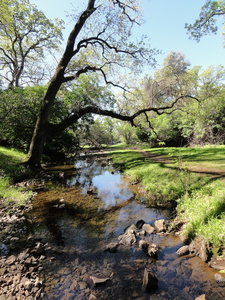 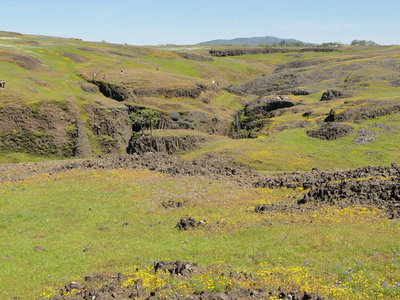