“An on-trail/off-trail hike to an amazing 50-foot waterfall deep in the Mount Thielsen Wilderness. ”

The usual wilderness area regulations and restrictions apply in the Mount Thielsen Wilderness. No permits are required, but please register at the trailhead. This wilderness is usually closed—unless you ski or snowshoe—by snow from December to May. The area around the Falls is not restricted but it is home to some unique botanical species, so please tread carefully.

This is a partly on-trail, partly cross-country hike (14.6 miles round-trip) to Cottonwood Creek Falls, a spring-fed 50-foot high waterfall that arises from a pumice basin below the imposing (and rarely seen) east face of Mount Thielsen.

The journey starts at the Howlock Mountain Trailhead, off Highway 138 at the north end of Diamond Lake by the horse corals.

From there, follow the Howlock Mountain Trail #1448 uphill for 3.5 miles to its junction with the Thielsen Creek Trail #1449 at Thielsen Creek. Turn right (southeast) here and continue uphill to a junction with the Pacific Crest Trail (USFS #2000) near Thielsen Camp. Turn right (west) on the PCT toward Thielsen Creek. Before reaching the creek, turn left (south) and go uphill along the north side of the creek. This is cross-country through open forest and, higher up, open ground–it's not hard, just pick the path of least resistance. You're heading for the lowest point on the Sawtooth Ridge at the head of Thielsen Creek and immediately north of Mount Thielsen. A faint use trail may appear as you approach the ridge.

Once you reach the ridge, Cottonwood Creek Basin will be spread out below you to the east. It's about 600 feet down the eastern slope to the Basin. This rather steep slope can best be descended by first contouring north on open ground and then going almost directly down through the trees (if you go straight down from the ridge, you'll run into an awkward-to-cross boulder field at the bottom). Once you're down, you'll get a full view of the contorted eastern face of Mount Thielsen–columnar and smooth basalt are all twisted together around a huge "cave", now oozing water and greenery.

Continue on the northeast side of the basin toward where the spring is shown on the map. There you'll find a green area sporting not one, but two, springs! Although each is only a few inches deep at the start, their two flows soon merge together to become Cottonwood Creek. Keep going southeast, following the creek to where it suddenly leaps over a lip, and becomes Cottonwood Creek Falls!

Your first look at Cottonwood Creek Falls can be stunning. Maybe it's the effort it takes to see them, maybe it's the unexpectedness of them existing only a few hundred feet from a (seemingly) waterless expanse, maybe it's the cool breeze and spray wafting up from them, maybe it's the little rainbow at the base of the falls. Regardless, seeing them is totally worth it. After enjoying them, carefully retrace your steps. 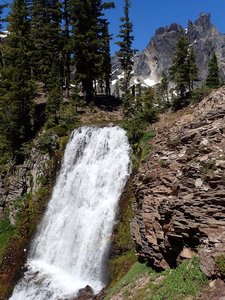 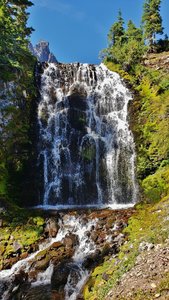 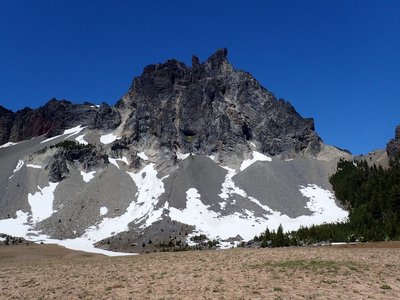 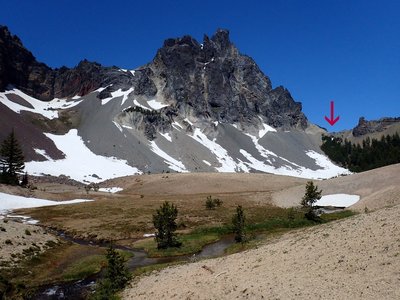 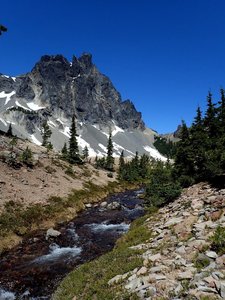 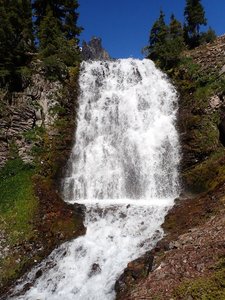