“The second day of the Milford Track following the Clinton River with spectacular views of the mountains on either side. ”

Day 2 of the Milford Track starts easy with little elevation gain. From Glade House, head northeast and cross the Clinton River over the suspension bridge. The first part of the track crosses through beech forest with the occasional water fern colonies. After 1.5 miles (shortly after mile marker 2), the track closely follows a river bend north revealing a great view of Dore Pass, the land route to access Milford Track. Shortly thereafter, you can explore the wetlands ecosystem and get a great view of Clinton Valley by taking the short Wetlands Nature Walk on the left. At 2.1 miles (shortly before mile marker 3), a track on the left leads to Clinton Hut.

Around mile marker 5 (at 4.2 miles), you reach the point where the north and west branch of Clinton River merge. Right at the fork you can also get a good view into the northern part of Clinton Valley and onto Mount Mitchelson (6352 feet) towering impressively above the valley. You continue along the west branch of Clinton River. Shortly before mile marker 7 (at 6.5 miles), you cross a huge landslide from 1982 that blocked the Clinton River and created Dead Lake after drowning a large number of beech trees. The water in Dead Lake is very still and you can see plenty of eel and trout. Looking north you can now also see Hirere Falls, a 330 feet waterfall that looks exceptionally good after rain. The area after the landslide is very prone to flooding, and it is not unusual to wade through knee deep water even at dry times.

At 7.2 miles (right in between mile markers 7 and 8), you reach Hirere Falls Shelter, a good lunch spot and also a great viewpoint for Hirere Falls with access to the Clinton River. After the shelter, the forest will clear a bit and offer you the first glimpse at Mackinnon Pass. Just a few minutes further along, the Hidden Lake Track is to the left. It's a nice and short hike to a great lake and waterfall. The track will rejoin Milford Track, so it's not a detour. Past mile marker 9 (at roughly 8.7 miles), the beech forest opens up completely to the prairie and offers stunning views of the entire valley. The highlight is Prairie Lake (to the left at 9.3 miles), a great swimming spot for the brave.

After mile marker 10 (with Prairie Shelter to the right), the track starts climbing again through beech forest. Reach another shelter called Bus Stop at 10.6 miles that is used in the event of flooding. Cross the wide rocky river bed and reach Pompolona Lodge.

It is a rare treat to see one of the endangered Blue Ducks (Whio) on the track. They have a fleshy tip on their beaks that allows them to scrape invertebrates off the rocks to eat.

You can find plenty of Water Fern (Matata) in some of the moist areas. It forms large colonies and contributes to the lush forest green. The other plant that stands out is the Green Hooded Orchid (Tutukiwi). It has developed a very elaborate mechanism to disseminate its pollen. Insects get trapped inside the hood by a tongue, covered in pollen, and then released again to pollinate the next flower. 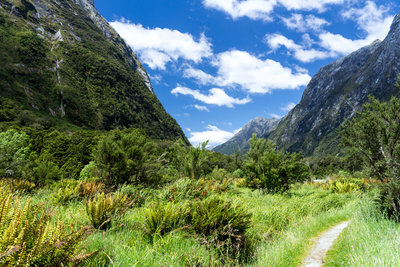 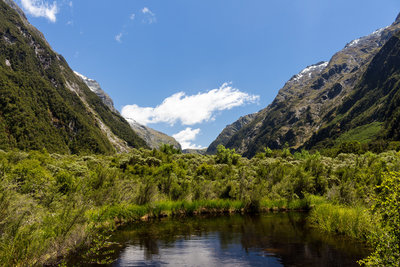 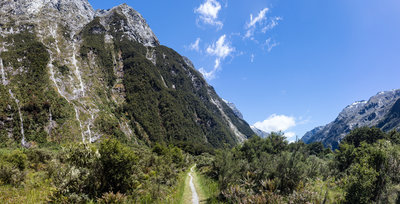 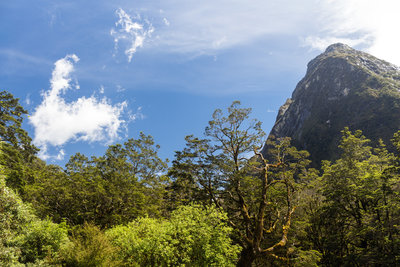 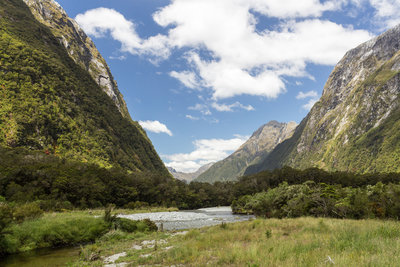