“The third day of the Milford Track across Mackinnon Pass—a true alpine crossing. ”

The third day on the Milford Track will get you across Mackinnon Pass. From Pompolona Lodge, head up what is called the Pompolona Staircase. Cross Pompolona Creek over the bridge and get a first glimpse at the pass and the lunch shelter at the top. The mountains on either side of Clinton Valley look very intimidating at this point. As you ascend further up the valley, St Quintin Falls can be seen on the right shortly before mile marker 12. The ascent is still moderate, but steady.

At 2.8 miles (between mile markers 13 and 14), you reach Mintaro Hut on the left. The hut is named after Lake Mintaro, which you can see shortly thereafter on the right. This is a good point to shed another layer of clothing and to refill your water bottle.

After mile marker 14 you cross Clinton River, though it is much less impressive now. The bridge can only carry one person at a time. Now the final ascent is in front of you. Over the course of more than a dozen zigzags, the track winds up the Mackinnon Pass. The treeline is roughly at 3,100 feet, and the view is truly stunning. In front of you is Nicolas Cirque, a bowl-shaped valley (typically with some snow left) that feeds the Clinton River. On the right side is Mount Hart (5804 feet). Before you actually reach the pass, you can already see the Mackinnon Memorial that was put up to commemorate Quintin Mackinnon. Just a few steps further you can get an incredible view of the Arthur Valley, Mount Pillans (4564 feet) on the left, Mount Elliot (6529 feet) on the right. If you look further to the right, you can see the Jervois Glacier and Mount Wilmur (6510 feet). Mount Balloon (6060 feet) is on the far right. Be careful as you approach the viewpoint, as there is a huge drop off just a couple steps further.

Ascend a little further and reach Mackinnon Pass Shelter. This is a great lunch spot. Next to the shelter is probably one of the top 10 toilets in the world. You can look right down Clinton Valley and you can even see Pompolona Lodge in the far distance. After lunch, a long descent awaits you. Head along the west side of Mount Balloon. The trail is sometimes very steep and rocky.

Once you are underneath Jervois Glacier, the trail slowly turns left and descends back below the treeline. You'll reach a number of staircases as you follow Roaring Burn on the left—a wild creek with spectacular waterfalls. Most noteworthy is Dudleigh Falls at 8.9 miles. Once you reach the junction to Sutherland Falls, Quintin Lodge is just a few steps away.

This section of the Milford Track crosses into the alpine area and offers a very different flora and fauna. One of the most prominent plants is Mount Cook Lily. It's the world's largest buttercup species and can be found on Mackinnon Pass.

In terms of birds, you'll definitely come across the Kea, a very curious and playful mountain parrot that is quite intelligent. One of the rarest species is the Rock Wren (Piwauwau), an alpine-dwelling bird with a well recognized continuous bobbing motion up and down. 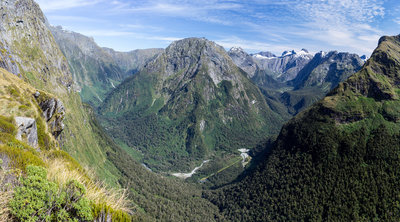 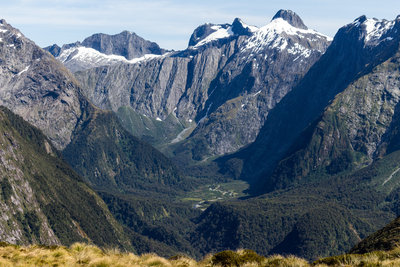 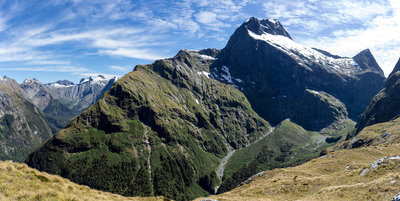 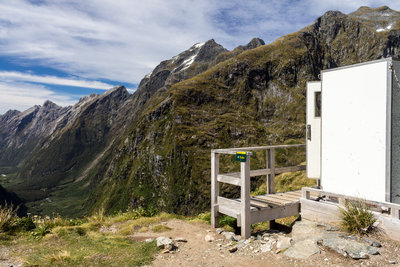 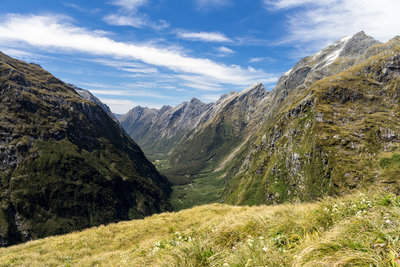 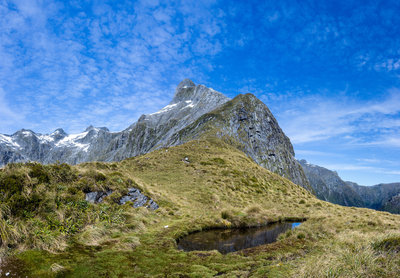