“Enjoy Mt. Hood's reflection in appropriately named Mirror Lake, then hike on for a better mountain view above the lake. ”

Family Friendly The 2.25 mile trail to the lake, a bit of a climb (less than 500 feet elevation), is usually manageable for most children with enough skittles or M&M's as incentives. The lake is 4.5 miles roundtrip.

Don't park by the tow away zone signs. Divided highway limits access and requires turn arounds at bottom of Laurel Hill or in Government Camp.

Trailhead will be relocated in 2018 or 2019 with a new connector trail from the new trailhead.

This very popular trail provides a great reflection shot of Mt. Hood in the namesake glacial cirque Mirror Lake. While it has a bit of elevation gain, most folks, including kids, can make the gradual 700 foot climb to the lake and hike the loop trail around the lake. The more adventurous should continue up Tom, Dick and Harry Mountain which is in the Salmon-Hucklberry Wilderness. With a 200 foot scramble to the top, enjoy the valley and Cascade mountain views of the Mt. Hood Wilderness to the north, the Salmon-Huckleberry Wilderness to the south, including Mt. Jefferson. The 1.9 miles of trail beyond the lake is narrower and climbs about 700 feet in elevation.

The relocated trailhead on the west end of Mt. Hood Skibowl's Ski Area and Summer Adventure Park means that in the summertime, when the trailhead parking fills, parking may overflow into Skibowl's lot, which means the trail and lake could be way overcrowded. Find another trail if this is the case. Better to return early in the day or shoulder season, to enjoy Mirror Lake without crowds.

In winter, the opposite can happen. Skibowl users arrive early for downhill skiing, and stay all day. So the new parking lot built to accommodate Mirror Lake snowshoers, will be full of downhill skiers from Skibowl. Early birds on snowshoes get the worm and the parking spot! Parking along highway will get you towed. Mirror Lake Trail is not marked with blue diamonds, like other snow trails. Stay on trail and take a map.

Mirror Lake Trail and Trailhead were relocated in 2018. The trailhead is now at the west end of the Mt. Hood Skibowl Ski Area. The trails is about 1.4 miles longer round-trip than it was before. The hike around the lake is 4.6 miles round-trip. Hiking to Tom, Dick & Harry, makes it 8.3 miles round-trip. The new plaza has a restroom and interpretive signs. The first 1000 feet of the trail is paved and barrier free as it switch backs down to a platform along Camp Creek.

From that point, the trail narrows and is dirt. Ten bridges were added to the new trail. After crossing Camp Creek, there are a series of six more bridges as the trail heads west, through thick forests of Western red cedar, Douglas fir, and hemlock, before crossing a powerline corridor. At that point, the trail drops slightly to the northwest, switchbacks, and ties into the old Mirror Lake Trail.

The trail heads south, crossing the powerline again, before climbing two switchbacks and arriving at the lake. The most scenic loop around the lake is to stay to the right at the first intersection. Hike the west side of the lake, accessing the shoreline on the stairs and rock access points. The best views are at the southwest corner of the lake, but these are also the wettest sections, so please stay on trail and boardwalk. On clear, still days, you can get the namesake picture of Mt. Hood to the northeast. Skirt the spirea shrubs on the east side of the lake, before crossing the bridge over the lake's outlet creek and completing the loop.

Most hikers then return to their car, but for those wanting longer and steeper, retrace the west shoreline and stay to the right at the next intersection climbing up to Tom, Dick and Harry Mountain. The trail heads west, gradually, but steadily climbing, as it wraps around the northwest side of the mountain. The trail crosses a talus opening and the head of a drainage, before ducking back into the smaller true fir and mountain hemlock forest. The trail climbs up to the saddle that drops into Wind Creek basin. At this point, the trail heads east and really starts climbing along the ridgeline, before breaking out in the open, rocky outcroppings near the top.

The official trail ends at the first peak offering 360 degree views of the Portland-metro area, Mt. Hood and Salmon-Huckleberry Wildernesses and majestic Mt. Hood. Some users scramble east to the next peak at the 5,000' level overlooking the upper parts of Mt. Hood Skibowl Ski Area.

The trail starts near the transition between western hemlock and mountain hemlock, with plenty of Douglas fir, and western red cedar in the moister areas. Lodgepole pine predominates in the higher drier areas. Rhododendrons, bear grass, and spirea (around the lake) are most common. Indian paint brush, Pacific dogwood, avalanche lily, lupine, trillium and bunchberry are also wildflowers that can be found on the trail.

Wikipedia says Tom, Dick and Harry Mountain is named for its three distinct peaks along the summit, forming the cirque that is now part of the Mount Hood Skibowl ski resort.[4] The highest peak has an elevation of 5,070 feet (1,545 m). The name was in use as early as 1897, according to Elijah "Lige" Coalman, the namesake of Coalman Glacier. The mountain has also been called "Tom Dick Mountain" in the past, although the Board on Geographic Names officially decided in favor of including "Harry" in 1969 making it a play on phrase "Tom, Dick and Harry." 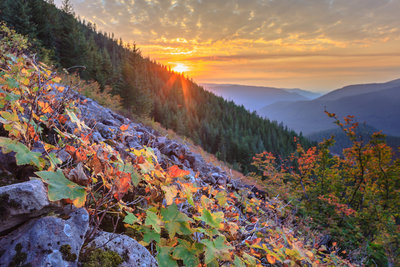 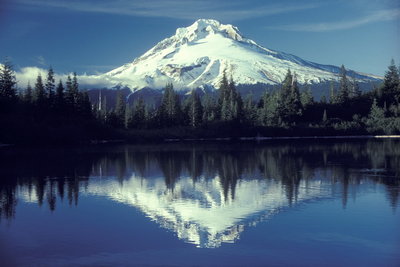 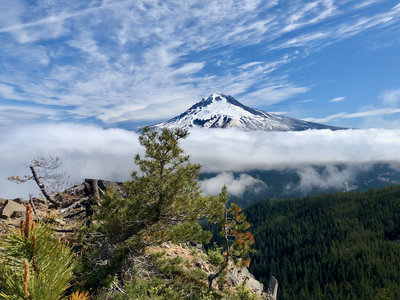 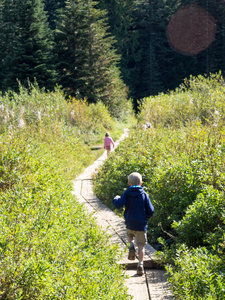 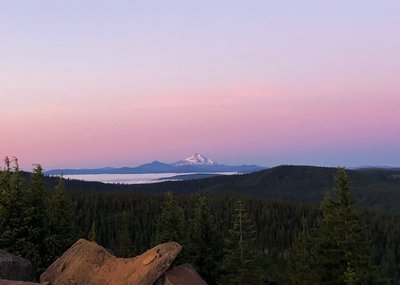 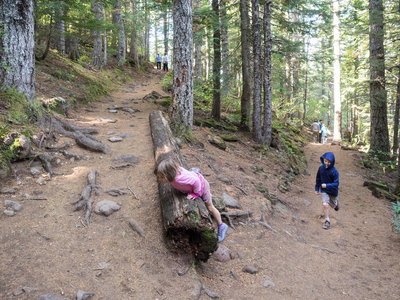