“The best day hike in the world. ”

Family Friendly No scrambling, low risk, but acclimatization at the nearby Lake 69 Lodge is recommended.

Lake 69 is located at 4650 meters (15,256 feet). A 40 minute private transfer in and out of the trailhead from Llanganuco Mountain Lodge is available.

Little needs to be said of Lake 69; it is the gem of the Cordillera Blanca, ranked amongst the best day hikes in the world. It surely must be in the top ten world day treks, we'd just like to know what the other 9 are!

From your private drop off at Cebollapampa, a well established trail winds up the Demanda Valley, alongside the frigid waters of the stream from Lake 69 meandering through the grassy plain on your left. Crossing a lesser tributary on stepping stones, onto an old landslide, hike past the base of the a huge waterfall to gain the first set of switchbacks. Reaching the top of these switchbacks, turn to give yourself a pat on the back and admire the full splendor of the cascading waterfall.

Moving along, wander across an open plain past the small lake (68) that affords open views of the twin peaks of the Huascaran Massif, the highest tropical mountain in the world. After some overgrown ruins you'll attain the last set of switchbacks, before staggering onto the banks of the aquamarine Lake 69 hemmed in by the peaks of Chacaraju (6112m) and Pisco (5752m).

There is an optional add on via Pisco-refuge, max alt. 4887m.

Mountain Lupins, Quenal - the tree that grows at the highest altitude in the world. Viscachas (Rabbit with squirrel tail) on the rocks to your RHS when you cross the creek after Lake 68. 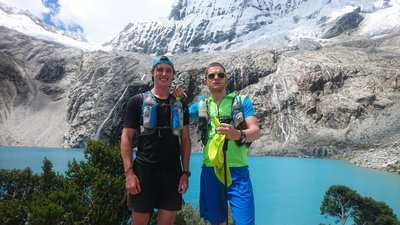 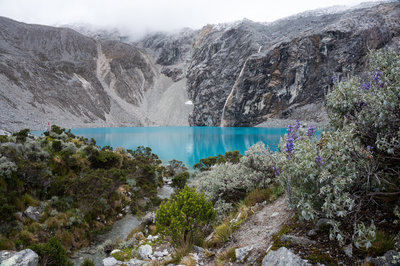