“Climb the highest peak in the Indian Ocean along a more scenic and secluded - but longer - route than from Cilaos. ”

This is a stunning route to the 10,070 ft (3,070 m) summit of Piton des Neiges, an extinct shield volcano responsible for forming about 2/3 of Reunion. You'll have unrivaled views of the whole island from the summit, and excellent diverse views along much of the route up. On clear days you'll be able to see the summit of Piton des Neiges from the trailhead all the way to the top. You should expect mud, some standing water, slippery rocks/logs, ladders, and some very limited scrambling along this route. It's much longer than the Cilaos route along GRR1, but offers far better views and fewer people (until the Refuge).

I highly recommend that you spend the night in the Refuge and make a pre-dawn summit to experience the sunrise from the top of the island. Many people do this so you won't be alone and the Refuge is a fun place to meet others. It also sells dinner, breakfast, and - best of all - beer! Just don't expect luxury. Do expect it to be below freezing and windy at the summit.

This is a tropical island: expect clouds to roll in and obstruct views around 11:00am most days - especially during the southern hemisphere's summer. Start early! Despite it being a tropical island you should also expect it to be very cold high up. Temperatures can easily drop below freezing at the Refuge - bring warm clothes! About 2/3 of this route is exposed to the sun.

If you plan to stay at the Refuge be sure to make reservations in advance - even during off-peak seasons. Bring cash for food, coffee, and adult beverages if you plan on partaking. Consider ear plugs to sleep soundly. You can make reservations for a bunk bed here.

There is parking available for perhaps 15 cars. The trailhead is clearly marked, and you'll notice the nearly-identical-small-white-rental-cars that populate La Reunion. The narrow farm road to the trailhead was unnamed (as of June 2018), but had large white signs reading "Piton des Neiges" with a hiker symbol. It's about 1.5 km south of the top of Col Bellevue if coming from Saint Denis. On clear days you can see Piton des Neiges from N3 and the trailhead.

This route follows the red and white horizontal-stripped blazes of the trans-Reunion trekking trail GRR2 to Refuge de la Caverne Dufour and then the white blazed Piton des Neiges Trail to the summit.

The beginning of the trail passes through open pastures populated by cows. You'll be between two fences much of this part, but you'll get to enjoy good views along easy trail that knocks out 500 feet of barely-noticeable elevation in about two miles. In a few places little ladders help you cross over the fences.

The next part of the route enters thick forest and gets slightly steeper. This section can be very wet and muddy with logs and rocks have laid to help, but they can be slippery. There will be limited views for about a mile until you get to the edge of Grand Bassin, a massive canyon eroded from Piton des Neiges shield. Enjoy views that no one coming from Cilaos will see as you climb to the top of a ridge line. The trail is really cool here: you'll be on top of a narrow (but safe-feeling) ledge between the plains to the north and the bottom of Grand Bassin 2000+ feet below. Some ladders and a few minor scrambles drop you down the ledge to the bottom of the col. Here the trail will turn north away from Grand Bassin down a steep trail section onto the plain.

From the cool ridge line you'll have about a mile of slogging along a wet rocky trail. There are some nice views north but you may as well power through to a great lunch/snack spot where the trail crosses Bras Chansons. A small cave like feature and trickling waterfall highlight the volcanic rock you're on and you'll have clear views north plus space to sit.

From Bras Chansons the trail will enter shorter evergreen brush. It will likely still be muddy, but is far less of a slog than the previous few miles. You'll pass the Sentier Jacky Inard Trail near a tiny pond at mile 5.5, and then come to an intersection with a secondary trail up from Cilaos at mile 6. There is an awesome view into Cirque Cilaos from here. From here to the intersection with the main route up from Cilaos on the GRR1 you'll have awesome views of Piton des Neiges, views behind you to Piton de la Fournaise, some views over Cilaos, and views north. The trail is rocky but easily navigable and gets steep right before GRR1.

It's common to spend the night at the Refuge de la Caverne Dufour (about 14 Euro for a bunk). Dinner is "meh" and costs more than the bed but is communal and a fun way to meet other hikers from around the world. Wake up super early to tackle the summit in time for the sun rise (most other visitors will do this). You can get (instant) coffee on your way back down after summiting, but maybe skip the "breakfast" which is white bread.

From the Refuge look for the Piton des Neiges Trail to the summit. From here the going is steep, but doesn't require scrambling beyond "big steps". You'll cover the two miles and nearly 2000 feet quite quickly. The white blazes are often enough that you should never lose them even if hiking in darkness with only a headlamp. The short alpine flora mean you'll have unobstructed views the whole way up! The summit is very large and flat. You'll be able to clearly see Piton de la Fournaise to the east, Cilaos to the south, Grand Benare to the west, and the ocean to the north. Cirque de Salazie and Cirque de Mafata are blocked. Check out the small spur to a sub-peak just past the summit for alternative views.

Return along the same route you took up.

This trail passes through a UNESCO World Heritage Site established in 2010 that covers 40% of the island. 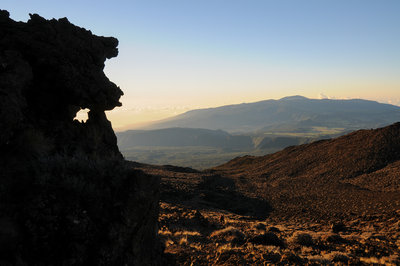 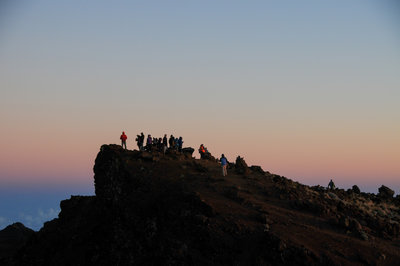 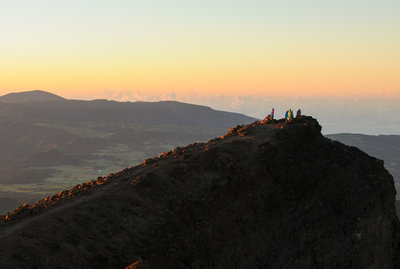 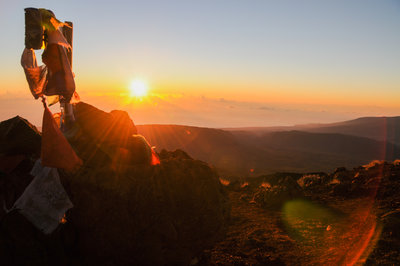 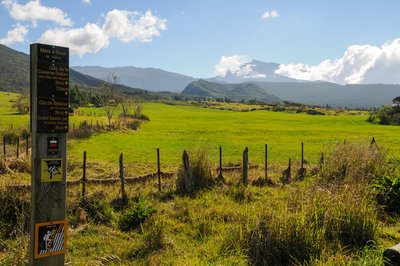 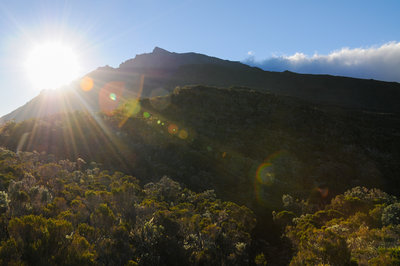