“A large conservation area that falls on the vertex of 4 large cities (Toronto, Mississauga, Brampton and Vaughan). ” This great loop takes hikers on a tour of the trails of Claireville Conservition Area.

Sighting of the dangerous Wild Parsnip plants in large quantities. Stay away from them.

The trail surface is more of compacted mud or, in most cases, concrete that is worn out. The area is heaven for bird watchers or flora and fauna enthusiasts. A large number of species can often be spotted on the way.

This is a semi-urban park and feels like an oasis in the big cities. There is also a ranch (horses) which offers riding nearby. There are several old houses which depict the park's century-old heritage. A bowstring bridge is another heritage structure that crosses the stream inside the park.

Parking is available, but the lot is too small for the area. Geographically, the area falls on the vertex of 4 large cities (Toronto, Mississauga, Brampton and Vaughan) so this semi-urban park can be quite popular.

Fauna: The park is home to the eastern coyote, wood duck, chimney crayfish, deer, muskrat, and common garter snake. The park's varied landscape can be admired from many vantage points.

Birds: Dozens of bird species can be seen. Some use the park as a stop on their migratory route, while others breed in the park.

The TRCA has declared an early 20th-century farmhouse in the northern part of Claireville as a heritage property; major restoration began in 2005. 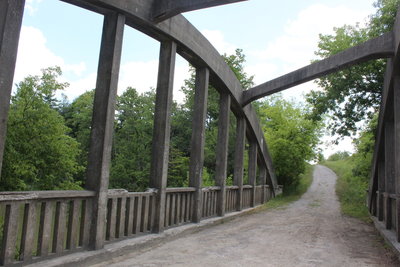