“An epic primeval forest hike on the edge of Stockholm. ”

Welcome to Tyresta National Park, with the largest and finest primeval forest in the southern third of Sweden. Here, one can experience silence, solitude, and unspoiled nature—just twenty kilometers from the center of Stockholm. There is nothing like it so close to any other capital city in Europe.

The area is characterized by a rift valley landscape which is typical for central Sweden but unique in an international perspective. The park extends over almost 5,000 hectares, and it has been protected to preserve its exceptional natural values and to safeguard its importance for recreation. You can find primeval forest here with pine trees that are 400 years old, clear forest lakes and a large number of unusual plants and animals. You can also see broad-leaf deciduous woodland, open arable land and historical buildings of cultural interest.

By means of the 55 kilometers of marked, color-coded trails and footpaths running through Tyresta National Park and the adjoining Nature Reserve, visitors may experience the extensive ancient forest, the lakes with their impressive shoreline cliffs, or stroll all the way to the Baltic Sea.

Highlights are:
- Alby Recreation Center with sauna and beaches (trailhead, parking lot, restrooms, café etc.)
- Nyfors rapids (especially wild in early spring)
- All the beautiful primeval forests and rocky pine land
- The beautiful lakes of Tyresö-Flaten, Långsjön, Mörtsjön, Stensjön, Lanan and Årsjön
- The ancient castle of Stensjöborg with beautiful views over the lake Stensjön
- The rapids to Stensjödal, follow the water down a bit and admire the moss-covered slopes.
- The enormous fire area from 1999.
- Tyresta village, the main entrance to the national park and also a trailhead option, is on the southwest border. It provides food service, public toilets, rest cabins, fireplaces and a naturum. The naturum (visitor center) offers slide shows as well as an exhibition about all of Sweden’s national parks. The village dates from the Viking Era and is of great cultural-heritage value.

This hike will take you through an extraordinary experience that has it all, and at the same time you'll get a decent long hike where you'll be able to challenge all of your senses.

You'll be guided past rapids and lakes, over hills and through valleys, through pine and fir forests, and you'll pass a large fire area from 1999. You'll also pass Tyresta village, which is considered to be among the best preserved villages in the Stockholm region and has been inhabited since the iron age. The buildings date back to the 18th century and have been preserved in their original state. The best section is probably all the beautiful primeval forests and rocky pine land that you'll hike through plus all the lakes you hike past.

My hike is a loop that start and ends at Alby Recreation Center where you can go by car (large parking lot for free) or by bus (nr 873 from Gullmarsplan to Nyfors, then hike 10 min. to Alby Recreation Center). You can also start and end at Tyresta village where you also have a large parking area for free or take bus nr 834 to Handen and then continued on via commuter train, OBS. You can check the timetable at SL.

You'll start hiking on the Sörmland Trail to Nyfors rapids (1.4km) were you'll get a feeling of what's ahead—a wow-feeling instantly! Then, leave the Sörmland Trail and follow the shoreline along the Lake Tyresö-Flaten for 1.5km. After a while, you'll also pass the Old river (Gammelströmmen) and the shore line of the Lake Långsjön-Tutviken before you turn left and goes south (4km). Follow the trail a bit uphill to a meadow (4.5km) where you cross the larger Sörmland Trail and continue straight ahead on your trail into the forest ahead.

Continue uphill for about 1.5 km where you'll turn left on Sörmland Trail (6km). Follow Sörmland Trail for about 700m over some pastures, a footbridge, and under a power line. Then the Sörmland Trail turns right uphill, but you follow the trail straight ahead into the dense moss-covered forest. After a breathtaking 1.5km, you'll touch the north side of the Lake Långsjön (8km). Follow the trail southbound on the east side of the lake, and after a few hundred meters, you'll reach a shelter beside a small rapid where I suggest that you stop for some energy and contemplation.

Then, continue on the trail southbound along the shoreline to Lake Mörtsjön where you'll see clear traces of beavers. Continue straight ahead and don't forget to enjoy the quiet, technical trail between the lake and the cliffs. After a total of 10km, you'll reach the heart of Tyresta National Park and the Lake Stensjön. It emerges from nothing, and the scenery will blow you away. Turn left and follow the shoreline for a while before a larger hill turns up. Follow the hill and look for the "entrance" to the ancient castle that lies on top of it. Climb uphill and enjoy the fantastic view over the Lake Stensjön and the large fire area beyond. It's epic! Then continue your journey along the shoreline of Lake Stensjön, and, if it's a hot summer day, you can take a dip in the northeast corner of the lake. After a few hundreds meters, you'll enter the fire area, and after a total of 13km, you'll reach the floodgate to the rapids of Stensjödal.

If you have time, do follow the small trail along the rapids down to the Lake Nedre dammen for approximately 400m. Otherwise, follow the signs to Tyresta village and prepare yourself for a thrilling 7km journey through scenery that almost gives you a feeling of judgment day, when you pass the enormous fire area. When you reach Tyresta village after a total of approx. 21km, you'll have several options for recreation, rest, and food. If you want (or need) to abort your journey, you can take the bus from here. Otherwise, turn around and follow the Sörmland Trail 13 km back to Alby Recreation Center. You'll pass several beautiful lakes and epic trail sections. Enjoy... and don't forget to inhale and exhale!

Some of the largest pines on the rocky terrain are over 400 years old, indicating that the Tyresta forest has been left undisturbed for a very long time. Today, over half of the forest in the national park may be regarded as genuinely primeval. In time, the entire park will become the same.

A primeval forest is rich in variation. Trees of many different ages and a variety of species grow close to each other. Dense thickets alternate with small open glades. There is an abundance of deadwood in various stages of decay. This is how Swedish forests looked before humans began to exploit them. Many of the plants and animals in a primeval forest are adapted to life in just such an environment.

Growing on the rocky pineland are thick carpets of lichen that are dominated by Cladonia species, including reindeer moss. In ground depressions, there are bogs where pine, Labrador tea and sphagnum moss are common.

The rocky pine land with its old, gnarled trees possesses a special beauty. The bedrock is fractured in an irregular pattern over the entire landscape; and in the deeper soil that fills the cracks and fissures grows luxuriant vegetation, with spruce as the dominant tree species. There are also bogs, marshes and nutrient-poor lakes.

This type of fissure valley landscape, with its surface rocks worn smooth by glacial action, is found nowhere else on earth but central Sweden and southern Finland. Tyresta is a good example.

The rolling landscape of the national park has developed from what was once a level shield of bedrock that dates from primeval times. By around 600 million years ago, wind and water had already worn down a pre-existing mountain chain. The flat expanse of rock thus formed has since been broken up by large and small fissures that criss-cross each other. The rolling landscape of today is a result of that process. 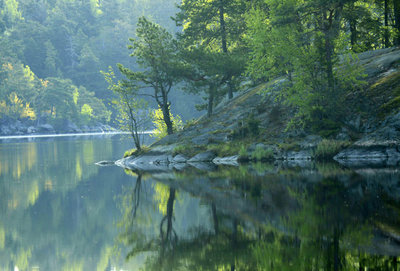 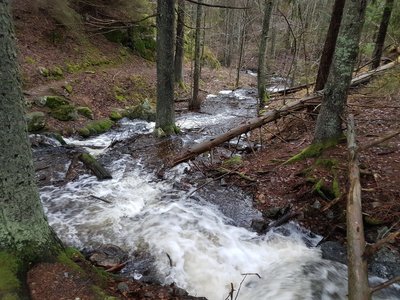 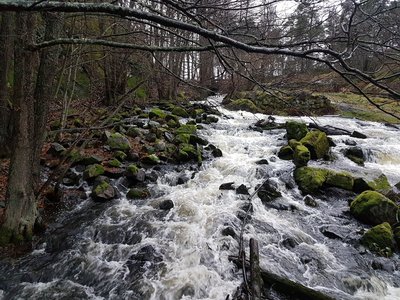 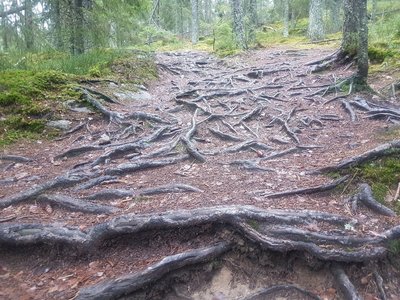 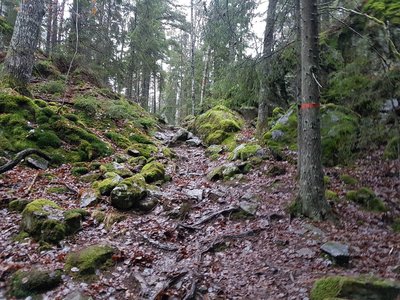 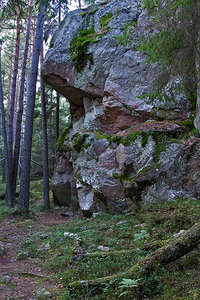